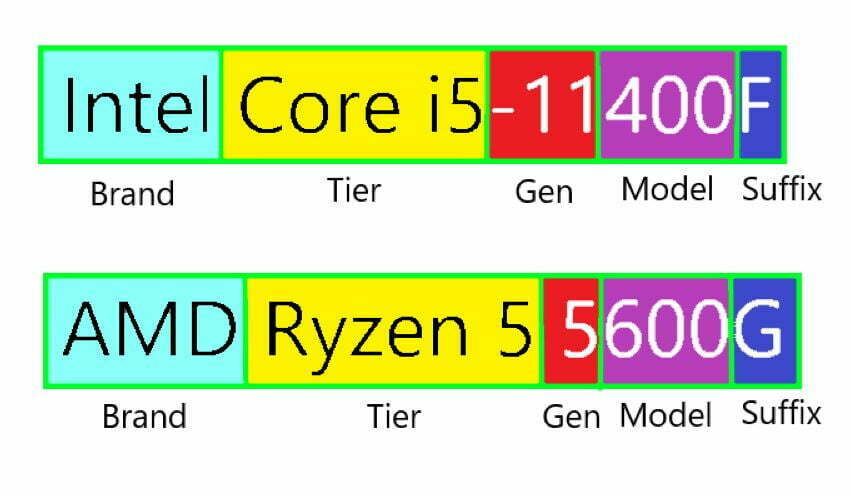 Why do you need to understand CPU names?

If you want to build a PC, one of the first components you’ll need to choose is your processor. Doing so can be tricky, though, since there are what seems like an endless supply of options to choose from.

To complicate things even further, you may notice that CPU names are typically what seems like a mindless mish-mash of letters and numbers. For instance, you might run across a Core i5-10400F or a Core i7-11700K. Do these model names even mean anything and, if so, what?

In this article we’ll break down the components of CPU names. Believe it or not, these names follow a very specific pattern, regardless of brand. Understanding why CPUs are named the way they are will help you keep models straight in your mind so that you can more easily hold a conversation about processors, or even just remember which one you have in your own PC.

An Overview of CPU Name Structure

There are five parts to a CPU name:

The structure is virtually identical for AMD processors. Below is a breakdown of AMD’s Ryzen 5 5600G.

Now, let’s look at each of these in further detail.

Brand is pretty intuitive: when denoting a specific CPU, people will sometimes specify the brand, although this is largely unnecessary.

Since a processor’s tier includes a brand-specific term (Core for Intel and Ryzen for AMD), it’s common to omit the brand entirely when specifying a CPU. For instance, if someone mentions the Ryzen 7 5800X, it’s understood that they’re referring to an AMD processor.

Tier is a bit more complex. There are four processor tiers within each brand: 3, 5, 7, and 9. Think of tier as a general indicator of performance; as a rule of thumb, a higher tier number will indicate a more powerful and more expensive processor.

Intel prefaces their tier number with Core i while AMD uses Ryzen. These are universal across all higher-end desktop CPUs. An Intel CPU, then, will be a Core i3, Core i5, Core i7, or Core i9. An AMD processor, meanwhile, will be a Ryzen 3, Ryzen 5, Ryzen 7, or Ryzen 9. You’ll frequently see this abbreviated as Rx or ix (for example, R5 3600 or i3-10100).

Intel and AMD processors within the same tier should have comparable performance, assuming they’re from the same general time period. That is to say, a 2021 Ryzen 5 and Intel Core i5 CPU should perform similarly to each other, because they tend to have the same or similar core and thread counts (with the exception of Ryzen 9/Core i9).

You can read more about how the tiers differ in our PC-building beginner’s guide.

A CPU’s generation indicates its age. Intel is currently on its 11th generation of processors, while AMD is on its 5th. Intel and AMD have roughly parallel generations; 11th-gen Intel is most similar to 5th-gen Ryzen, 10th-gen Intel is comparable to 3rd-gen Ryzen (there is no 4th-gen for some reason), and so on.

A CPU with a newer generation will be better than a comparable processor from an older generation. This is because processor IPC (instructions per cycle), core count, and thread counts generally increase over time.

The processor’s model gives you the most exact idea of performance, at least within a specific generation. Model is a three-digit number (the last three in a CPU’s name). For instance, the i5-10400‘s model is 400.

AMD and Intel use very similar model structures. The higher the number, the more powerful a processor is (within same or parallel generations), so a Ryzen 5 5600 should be better than a Core i5-11400, and should be closely comparable to a Core i5-11600 (remember, 11th-gen Intel and 5th-gen Ryzen are “equivalent”).

In the same vein, same-model different-generation CPUs should typically perform similarly to each other, with the newer processor having a slight advantage. Thus, an i5-11400 is better than an i5-10400, but not by a massive margin.

Both AMD and Intel models always fall into the same tiers:

This means that you can extrapolate a CPU’s tier from its model, even if it isn’t explicitly stated. An Intel 11900K, for example, must be an i9 (the model number is greater than 800).

Lastly, we have the suffix. Think of this as an indicator of something out of the ordinary; if a CPU has the default feature set, it won’t have a suffix.

AMD and Intel have entirely different suffix systems, and we’ll look at them both.

First up, we have Intel’s K-series of processors. In an Intel CPU name, a K indicates that the processor is multiplier-unlocked, which means it can be overclocked. In other words, as long as your cooler can keep up, you’ll be able to increase the clock frequency of your CPU above the factory setting.

This is useful if you’re trying to push your CPU’s performance to the limit. Keep in mind, though, that you’ll typically pay a premium for a K-series CPUs as compared to its non-K counterpart. The Core i5-11600, for instance, has a recommended customer price of $224, while it’s $272 for an i5-11600K.

Typically overclocking doesn’t offer enough of a performance boost to be worth the extra money. For this reason, we recommend K-series CPUs primarily for overclocking hobbyists.

Keep in mind that if you want to overclock your CPU, your motherboard must support this feature. Currently, only Z-series motherboards like Gigabyte’s Z590 UD AC are overclocking-compatible, so if you get a B or H-series board it’s best to forego a K-series CPU in favor of a standard locked SKU.

There are typically three or four K-series CPUs per generation. Typically the highest-end i5 (x600) and any i7 or i9 CPUs have an unlocked counterpart.

By default, Intel processors come equipped with integrated graphics. This means they’re able to display an image on your screen without the help of a dedicated graphics card; all you need to do is plug a display cable directly into your motherboard.

If you’re going to buy a discrete graphics card anyway, though, you can save some money by buying an F-series CPU. These processors don’t have integrated GPUs, but they’re usually a good bit cheaper than their non-F counterparts. For example, Intel’s Core i5-11400F comes at a recommended customer price of $157, versus $182 for the standard i5-11400.

Most of the time, then, you’ll want to buy an F-series CPU unless you don’t have an accompanying graphics card. It’s an easy way to save a few bucks on your total cost without skimping on any features. If you don’t have a dedicated GPU, though, make sure to buy a non-F processor unless you enjoy staring at a black screen.

Intel CPUs with the KF suffix have, as you may have guessed, the combined features of K and F-series processors. They are unlocked for overclocking and lack integrated graphics.

These are usually the favorite for expensive rigs, since these tend to include graphics cards, Z-series motherboards that support overclocking, and capable cooling solutions and VRMs that allow for high clocks.

AMD CPUs differ greatly in that they’re unlocked and without integrated graphics by default. This means that a suffix-less Ryzen processor won’t have graphics and will be able to be overclocked with a B or X-series motherboard, which more or less does away with the need for a K or F-series.

They do have a couple of suffixes, though.

An X tacked onto the end of a Ryzen CPU indicates that its base clock speed is a little bit higher out of the box. In other words, a Ryzen 5 3600X will outperform a Ryzen 5 3600 if you overclock neither.

X-series CPUs cost more and generally aren’t worth the money, as the boost in performance is negligible. Some processors only exist in an X make, however (there’s no R5 5600, only a 5600X), in which case this isn’t a concern.

Since having no iGPU is AMD’s default, a suffix is needed to indicate the inclusion of graphics capabilities. AMD uses the letter G to accomplish this.

AMD’s Ryzen 5 5600G is one example of a G-series processor. It’s worth noting that AMD’s integrated graphics are typically far better than Intel’s in terms of the framerates they can push, so if you have no discrete graphics card a G-series APU may be your best choice.

Let’s look at a couple of example CPU names and break them down based on the rules we’ve looked at.

We can see right off the bat by looking at the tier that it’s an i7. This tells us it’s a pretty high-end CPU. Since it’s an i7, we also know that it’s an Intel processor (remember, an AMD CPU would be a Ryzen 7).

Looking at the numbers, we see that it’s a 9700K, so we know that it’s 9th gen Intel. This means that it’s a couple of generations old, but not too outdated (it released in October 2018).

The 700 following the generation number doesn’t give us all that much information in this instance. The i7-9700 and its K/KF variations were the only desktop 9th-gen i7 models, so there’s no need to indicate performance in comparison to other i7’s. If there was, say, an i7-9800, the model would tell us that the i7-9700 would have slightly lower performance.

Lastly, the K at the end tells us that this model is unlocked and ready for overclocking with a Z-series motherboard.

Moving on to the numbers, we find that it’s a 5th-gen Ryzen CPU (5600G), meaning it’s part of AMD’s most recent lineup.

The 600 gives us an even better idea of where it falls in the 5000-series lineup. It’s presumably slower than the 5700G and 5800X. With this information we can also surmise that it’s faster than the R5 3600, since it’s the same model of a newer generation.

Art of PC is reader supported. We may earn a commission if you make a purchase through our affiliate links. Thanks for your support!