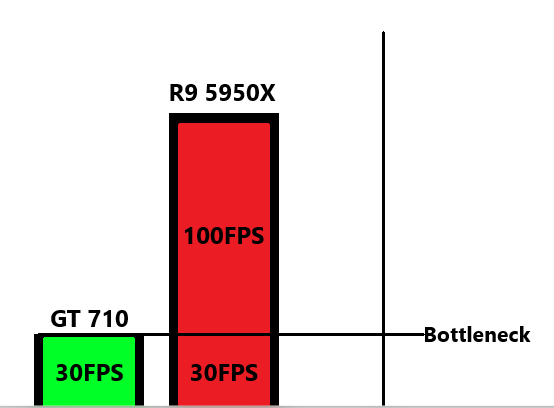 What is a Bottleneck?

You want the highest in-game FPS possible, for obvious reasons. The higher your framerate, the smoother and more responsive your game feels. So, what’s keeping your computer from pushing, say, 1000 frames per second? It’s simple, one of your components is bottlenecking your system.

So, what is a bottleneck? Simply put, it’s a situation in which a specific component caps your maximum performance. The components in question are almost always the CPU (central processing unit) and GPU (graphics processing unit); most of the time your storage, RAM, motherboard, and other components don’t significantly impact your framerates. Let’s look at a specific example of a bottleneck.

In this hypothetical scenario I have a gaming rig decked out with a Ryzen 9 5950X (for those who aren’t familiar with this part, it’s widely considered to be the best CPU available at the moment, although it’s likely to be overtaken next month by Intel’s Core i9-12900K). For my graphics card, I have an Nvidia GT 710, a five-plus year-old graphics card which was bottom-of-the-line even when it was new.

The 5950X is capable of running your favorite game at up to 130FPS at your preferred settings. Meanwhile, the GT 710 can only achieve 30FPS in the same game. Thus, you can only run the game at 30FPS; your PC is only as strong as its weakest component. In this instance, your graphics card is this weak link. It limits, or bottlenecks, your FPS.

This is highly inefficient, since you spent a lot of money on the 5950X and can’t make use of its 130FPS capabilities. You’d get the same performance with a cheaper processor that’s only capable of pushing 30FPS in your game, since you can’t get above 30FPS with your current graphics card.

Alternatively, you could’ve bought a cheaper CPU that’s capable of running at, say, 60FPS, and spent a bit more money on a faster graphics card that can also hit 60FPS. In the end, then, the goal is to buy a processor and graphics card that are as close to each other in performance as possible, so as to minimize the “wasted” potential.

Is it possible to avoid bottlenecks completely?

Obviously it’s a bad idea to build a system like the one in the example above. It would be a poor expenditure of your hard-earned money. The truth is, however, that it’s impossible to completely avoid bottlenecks. In online circles bottlenecks seem to be highly misunderstood; PC users try to avoid them at all costs when, in actuality, the best you can do is minimize them.

In real life a component’s capabilities aren’t so cut and dry as in the above example. For one, you’re probably not playing just one game, and each game is optimized differently. Secondly, a component doesn’t have a set maximum FPS they can achieve, since these numbers can vary massively based on a few variables. Here are the factors that have the biggest impact on components’ maximum FPS.

In-game settings have a massive impact on your graphics card’s maximum potential FPS, and a less significant but still noticeable effect on that of your CPU. Running a game on Ultra settings, for example, will give you lower framerates than playing the same title on Low or Medium.

Resolution is yet another factor that affects your components’ maximum FPS. As with graphical settings, your GPU is far more sensitive to changes in resolution than your CPU. You’ll typically get substantially higher framerates at 1080p than at 1440p, and 4K works your graphics card even harder.

Ray-tracing isn’t even supported by all modern graphics cards, but if your GPU supports the technology and you choose to use it, it’s good to understand how it impacts your PC’s performance. It causes your graphics card to work much harder, and as such will decrease your maximum framerate if enabled.

DLSS has the opposite effect most of the time; it allows you to get higher framerates than you otherwise would in higher resolutions, thus increasing your GPU’s maximum FPS.

How to Tell if You Have a Bottleneck

It’s fairly simple to tell if you have a bottleneck, but you’ll need the right software to do so. Download MSI Afterburner and RTSS (RivaTuner Statistics Server), and once they’re downloaded open Afterburner.

Click on the settings icon in the Afterburner app.

You’ll need to make sure you’re monitoring your GPU and CPU usage. Make sure the box is checked next to GPU Usage and CPU Usage, and check the Show in On-Screen Display option towards the bottom of the screen for each of these.

Note that you also have the option of displaying CPU Usage for each individual thread (CPU Usage 1, CPU Usage 2…), but it’s best not to do so as it clutters up the screen unnecessarily.

Set a Shortcut for On-Screen Display

Next, navigate to the On-Screen Display tab and set a hotkey to toggle it. Make sure it isn’t a key you use in-game, as you don’t want to accidentally toggle the OSD.

Open up your game of choice and toggle the on-screen display using the hotkey you set in the previous step. Go into your settings and ensure that your framerate is uncapped–otherwise you won’t get an accurate picture your hardware’s capabilities.

If your GPU usage isn’t anywhere near 100%, this means your CPU is the bottleneck. Notice how, in the above example, the CPU usage is only at 48%. This is because many games don’t utilize all threads.

On the other hand, if GPU usage consistently stays at or near 100%, it’s safe to say your GPU is the system bottleneck. It’s difficult to determine how severe the bottleneck is due to the way CPU usage is measured.

As mentioned earlier, a bottleneck of some degree is more or less inevitable. There are, however, some scenarios that are preferable to others. In an ideal scenario, your GPU will always be the system bottleneck.

The rationale behind this is simple: Graphics cards cost significantly more than processors per frame of performance, even at lower settings thresholds. If you’re going to have any unrealized potential FPS, it’s more efficient from a financial standpoint to spend less per unused frame. As graphical quality increases, cost per frame increases even more for graphics cards, while the increase is far less substantial for your CPU.

Additionally, even if your CPU’s additional performance is unutilized in games, it may improve performance in non-gaming tasks. On the flip side, an improvement in GPU will only improve gaming performance for the majority of users, since gaming is the most graphically-demanding task you’ll request of your video card.

How to Fix a GPU Bottleneck

If, after testing in several games, you find that your GPU is limiting your FPS, there are a few steps you can take to improve the situation.

If you’re playing on a higher resolution (1440p or 4K), consider dropping the resolution to 1080p. This might not be practical for everyone, as playing on a lower-than-monitor resolution will distort the image, but if you have an HD monitor lying around, using it will certainly reduce the strain on your GPU.

You can even take this a step further and drop your resolution down to 720p. This might be a bit extreme, but if you’re working with an older GPU it may be your best shot at high-FPS gaming.

An easier and extremely effective approach to boosting your FPS with a GPU bottleneck is to lower your graphical settings. If you can stomach less-than-lifelike graphics, drop them to Low or Medium or, if your game has a “performance mode” you can try switching to this. You’ll see an immediate jump in framerate.

In the same vein, turning off ray-tracing (if you’re using it) will give you an FPS boost. Granted, if you have ray-tracing it’s unlikely that your bottleneck is all too severe.

If you run games in QHD or UHD, try turning on DLSS if your video card supports the technology. You may see a substantial improvement.

At the end of the day, the most effective way to fix a GPU bottleneck is to upgrade the lackluster component. Graphics cards have a finite shelf life, and if you’re working with an obsolete model an upgrade may be due.

How to Fix a CPU Bottleneck

Fixing a CPU bottleneck is a lot more straightforward and, unfortunately, more costly. If you want higher FPS, there’s not much you can do; lowering graphical settings or resolution may help a miniscule amount but if you want to see a significant improvement in performance you’ll need to upgrade your processor.

The good news is that a solid CPU will last a long time, so hopefully you won’t be dealing with a CPU bottleneck more frequently than once every five years or so.