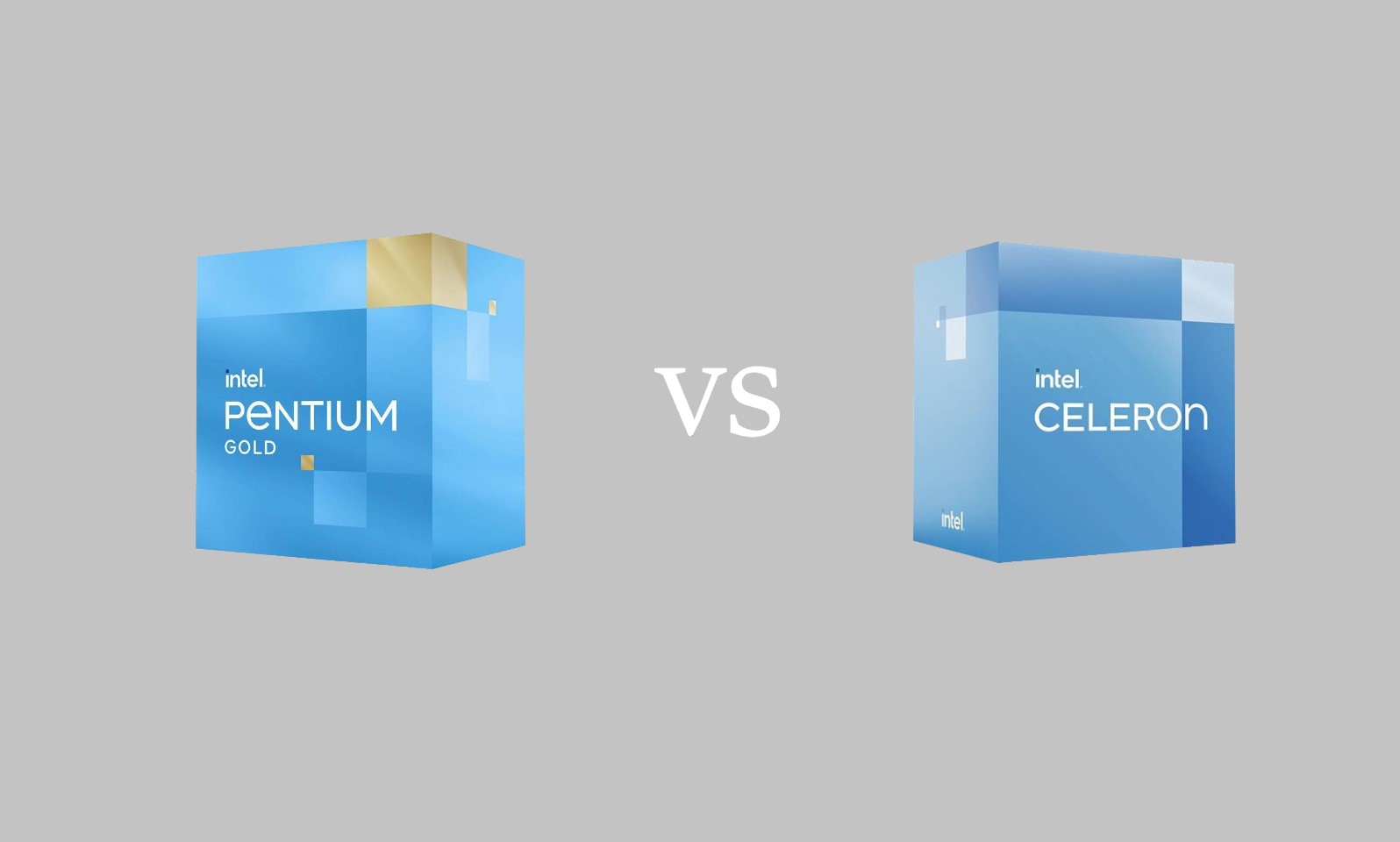 While there’s still great dispute in the PC hardware enthusiast community as to who makes the best CPUs, in recent times Intel has remained consistently atop AMD in the budget processor sector. Their recent Core i3-12100 is a dominant offering for a measly $130, but what do you do if your budget limits you to a CPU under $100, or perhaps even under $50?

Enter Intel’s Celeron and Pentium lineups. Even their highest-end offerings are available for less than $40 and $80, respectively, allowing users to build functional PCs on even extremely limited budgets.

While Celeron and Pentium processors have many similarities, they cater to two slightly different segments of the market, so it’s important to understand the differences and advantages of each. In this article we’ll compare the two lineups (specifically the flagship offerings from each, the Celeron G6900 and the Pentium G7400), and discuss which series is better for your specific use case. Before we dive into the nitty-gritty hardware specifics, a high-level overview of the Celeron and Pentium lineups is in order. Each of these series features only one main product within their latest desktop-oriented generations: Celeron has the G6900 while Pentium features the G7400.

Variations of these flagship CPUs do exist, such as the lower-TDP G7400T and the lower-clocked G7400E, as well as the G7400TE which combines the features of both of these, but they’re all virtually the same product with miniscule revision. The Celeron G6900 lineup includes the same available modifications, namely the G6900E, G6900T, and G6900TE.

Celeron represents Intel’s most budget-friendly offering of all. Of course, the tradeoff here is that it’s also Intel’s lowest-performing series. We’ll look into the specific numbers in the next section. Pentium CPUs pack a bit more punch, but are still a far cry from modern Core processors.

Both Celeron and Pentium are intended for everyday use in work or office-oriented environments where high performance isn’t requisite. Home PCs often feature one of these two processor series for this reason. Celeron and Pentium’s shortcomings become apparent mainly when utilized for tasks such as gaming or running complex code.

Both the Celeron G6900 and the Pentium G7400 feature two Golden Cove performance cores, the same ones found in 12th-gen Intel Core SKUs. The Celeron make has only two threads and a base frequency of 3.4GHz, while the Pentium has two threads per core (for a total of four) and a slightly higher base clock of 3.7GHz.

In a similar vein, both SKUs support up to PCIe 5.0, although the use of these capabilities isn’t recommended for the sake of cost-efficiency. The latest Pentium and Celeron CPUs are built for an LGA1700 socket type, meaning they’re compatible with the same motherboard chipsets as the Core lineup: H610, B660, H670, and Z690.

Both makes come equipped with Intel’s integrated UHD Graphics 710 which, while nothing to write home about in terms of performance, will alleviate the need to buy a discrete graphics card for general use.

Where performance is concerned, the cheaper Celeron line is naturally slower than Pentium in both single-threaded and multi-threaded tasks by a fairly wide margin. When factoring in Celeron’s comparatively discounted price, however, this discrepancy is acceptable.

In the wild, The G7400 tends to hover closer to $80 or $90, while the G6900 is usually around $40. Prices are eternally in flux, so this may not be the case when you’re looking to buy. Always check prices and reevaluate based on the current market before making a purchase.

When considering price, however, it’s essential to include the cost of a compatible motherboard as well. With either of these budget processors, it’s best to opt for a bare-bones H610 board (or a B660 if comparably priced), since neither of these CPUs draws enough power to take full advantage of even the cheapest VRMs.

The exception to this rule would be if you desire greater connectivity than the lowest-tier motherboards can accommodate. Large quantities of USB ports usually come at a slight premium.

When considering the combined cost of CPU and motherboard, then, the Pentium’s price seems a lot more reasonable. Using $90 as the estimated motherboard price and high-end price estimates for both CPUs, the G6900 plus board cost $142, while the G7400 plus board is $164. This is a much more reasonable 15.5% uptick in price for the upgrade from G7400 to G6900.

Celeron vs. Pentium: Which is Better Overall?

While it’s obvious that Pentium processors outshine Celerons performance-wise, is it enough to justify the leap in price? This depends entirely upon your use-case.

If your PC is effectively an email-writing, word-processing, weather-checking machine, a latest-gen Celeron processor is probably perfect for you. You’re unlikely to max that out, and it would be inefficient to spend money on unused computing power.

If you’re doing much more than that it certainly wouldn’t hurt to spend an extra $40 on a Pentium G6900. This CPU is still extremely cheap, and substantially more capable than Celeron models.

Finally, if you’re using your PC for gaming in any capacity above and beyond Minecraft at lowest settings, programming, or any other CPU-intensive task, consider making the jump to an Intel Core processor and a discrete graphics card. While a little bit more expensive, you’ll be glad you made the upgrade. Time is money, and you’ll save enough of it to warrant the additional cost in the long run.