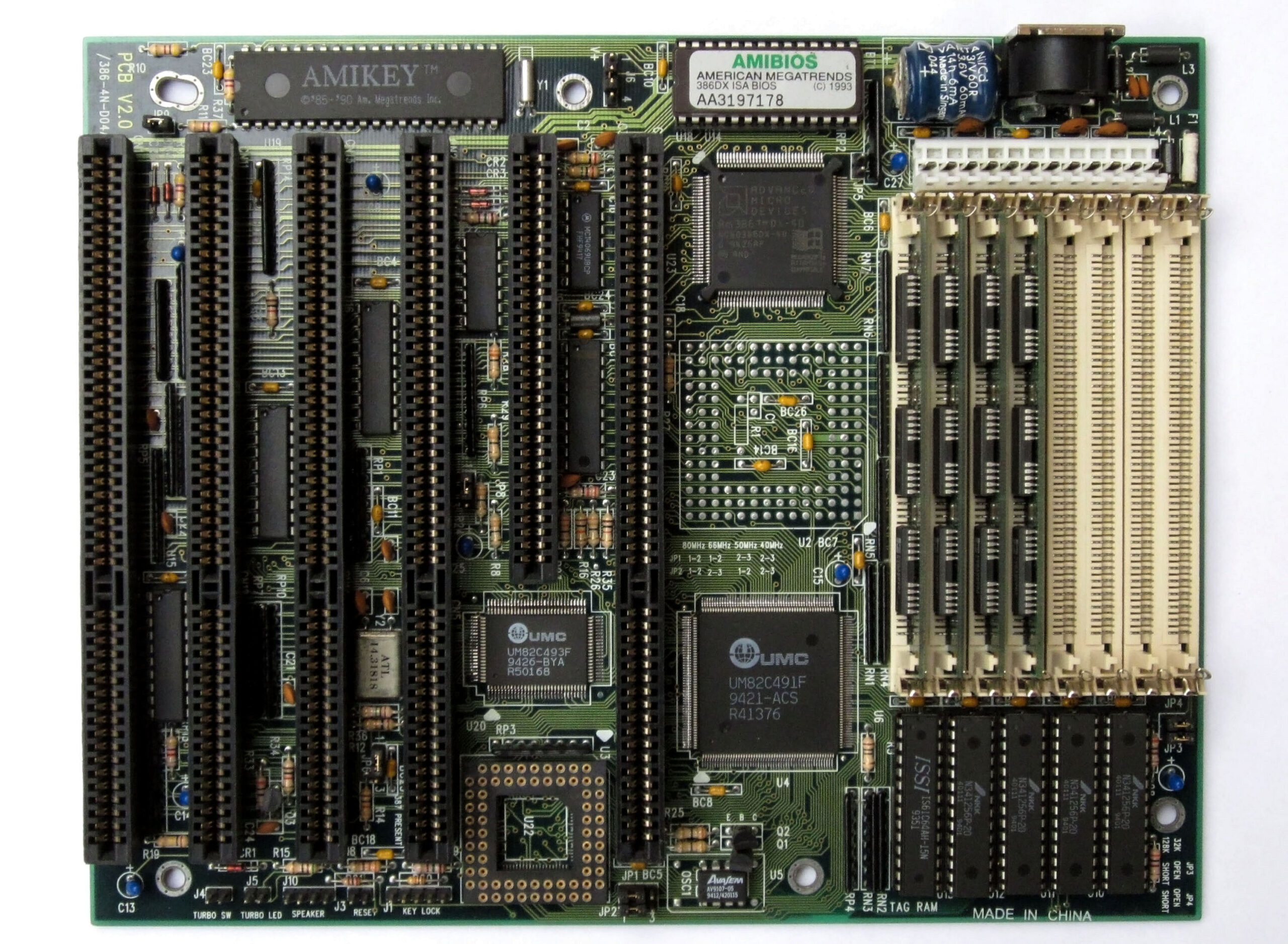 If you’re building a PC for yourself, one of the most important components you’ll have to choose is the motherboard. This is the central hub of your PC, and virtually every other component is connected to it in one way or another.

When picking your motherboard, one of your primary considerations will be form-factor, or the shape that the motherboard comes in. While boards are available in many different form-factors, there are only a few mainstream ones that you’ll likely be choosing between, which we’ll cover in-depth in this guide.

The motherboard’s form-factor dictates the physical size of the motherboard, which correlates to connectivity options and features. Larger boards have more room which is often utilized to increase the number of RAM and PCIe slots, USB ports, and supported storage drives.

A Brief History of Motherboard Form-Factors

Before diving deep into the new form-factors, let’s take a quick look back in history to see how the motherboards have evolved and become mainstream:

It in 1983 that IBM launched their new home computer, the “IBM Personal Computer XT.” As the specifications of this motherboard were open, manufacturers were quick to adopt the design and it soon became the industry standard.

The XT form-factor had dimensions of 216mm x 279mm (roughly 8.5 x 11in). This falls between today’s Micro-ATX and ATX sizes (both of which we’ll cover in greater depth in a minute).

It was slightly larger than the XT, with a width of 305mm (12in) and a depth of 279-330mm (11-13in). The variable depth owes to the fact that the motherboard featured an inch-wide L-shaped cutout, shown in the image below.

After the wide success of the AT form-factor, in 1985 IBM decided it was time to push its boundaries and see how much they could downsize the original AT design. They reduced the size of the motherboard and reduced the price.

This new development led the Baby AT to become the new industry standard. People started shifting from AT and XT to this new smaller, cheaper board.

The only concern about this motherboard was that its small size caused an entire PCIe slot to be blocked off when installing some larger CPU coolers.

As time has passed, technology has advanced immensely. Whereas there used to be one industry-standard form-factor, we now have several. While there technically exist scores of motherboard form-factors, only a few are actually used when building your own PC. These are, from largest to smallest:

Let’s take a look at the benefits and drawbacks of each of these, to better help you understand which suits your specific needs.

This large size allows for excellent connectivity, as EATX boards tend to feature at least four PCIe slots, abundant M.2 and SATA ports, and plenty of plugins for all of your peripherals. EATX also features 4 DIMM slots almost exclusively, so you’ll always have room for 128GB of RAM (not that you really need it).

This large form-factor allows for excellent airflow and provides ample breathing room for components. On the flip side, this limits your choice of PC cases, as you’ll have to select one that accommodates a massive 305mm x 330mm board. This is always an important aspect to consider before settling on your final choice. This form-factor is geared largely towards power users, as EATX is among the most expensive form-factors.

This is largely due to the fact that almost all EATX models are high-end Z-series or X-series motherboards built for extreme overclocks, designed to be used with the likes of Intel’s i9-13900K or AMD’s Ryzen 9 7950X. If you’re building a machine of the highest caliber, you may want to consider opting for an EATX model. Otherwise, we recommend you keep reading for some cheaper alternatives.

It also encompasses the widest price and quality range, ranging from budget-friendly boards with bare-bones features like Asus’ Prime B660-PLUS to DDR5-supporting, maximum performance models like their ROG Z690 Formula.

For this reason, you really can’t go wrong with ATX. If you’re crafting a full-sized rig, you can almost certainly find an ATX motherboard that suits your needs. On average ATX has slightly less connectivity than EATX, but still far more than the average user could possibly need. ATX designs predominantly include four DIMM slots.

The main drawback of ATX boards is that they tend to cost more than a comparable Micro-ATX model. Thus, if you’re building a budget gaming rig you’ll likely be able to save some money without any loss of functionality by downsizing to a Micro-ATX. It also shares the size disadvantages of EATX to a lesser extent, in that you’ll need at least a mid-tower chassis to house a board of ATX’s dimensions.

Micro-ATX (often abbreviated as mATX) represents the sweet spot for most PC builders. Many models of this form-factor are incredibly affordable, and offer just the right amount of connectivity, such that users don’t feel like they’re using less than they pay for.

While EATX and ATX almost always have 4 RAM slots, Micro-ATX is more variable: Some models with come with only two, but even this allows for 64GB of memory, more than most will utilize. It also tends to have a couple less USB ports and only one or two M.2 slots.

As far as size is concerned, it serves much the same function as ATX: It can be used in mid or full-tower cases, but not the smallest Mini-ITX chasses. Its dimensions are 244mm x 244mm (9.6in x 9.6in); it’s one of two square mainstream form-factors today, the other being mini-ITX.

We’d venture to say that Micro-ATX is the best choice for around 90% of prospective PC builders, owing to the fact that price-to-performance reaches its peak with this form-factor. There are so many options within the spectrum of mATX motherboards, so there’s something for just about everyone, with a couple of exceptions.

As with EATX and ATX, if you want to build a tiny rig with a Mini-ITX chassis you won’t be able to do so with a Micro-ATX board. Additionally, if you’re aiming to build an absolutely insane PC (note that we mean really, really expensive), the absolute cream-of-the-crop options lie within the ATX and EATX form-factors. In any other scenario, we highly recommend choosing an mATX for your build.

Last but not least we have Mini-ITX, sometimes just called ITX, the smallest of them all. It measures 150mm x 150mm, or 5.9in square.

It exists for one, and only one, very specific use-case: small form-factor builds. If you want a PC that will take up the least amount of space possible, you’ll want to use an ITX motherboard with a matching Mini-ITX case. In any other instance, ITX is a waste of your money.

Mini-ITX motherboards cost significantly more than their Micro-ATX, or even full-ATX, counterparts, and feature less connectivity. For these reasons, we recommend staying away from this form-factor unless small size is your main objective.

Choosing the right form-factor for your build

By this point, you probably have a fair idea of what form-factor is best for your build. If not, here’s a quick recap to help streamline your decision:

EATX boards are typically reserved for the highest-end builds, and offer more connectivity than most users truly need. They’re also traditionally rather expensive, so choose one of these only if you’re building a top-of-the-line PC.

ATX motherboards represent a good choice for the majority of high-end builds, as most of the best models are built in this form-factor. All else being equal, they’re cheaper than EATX and can fit in most standard cases.

Micro-ATX boards are the best option for the vast majority of users, as mATX is the cheapest form-factor overall and offers the best “happy medium” between features and pricing.

Finally, Mini-ITX motherboards should be reserved for small-form-factor (SFF) builds. This size is more expensive and offers less connectivity than others, making it a poor choice if you’re using a standard-sized mid-tower or full-tower case.

How to Get Windows 10 for Free or Cheap: 4 Easy Ways