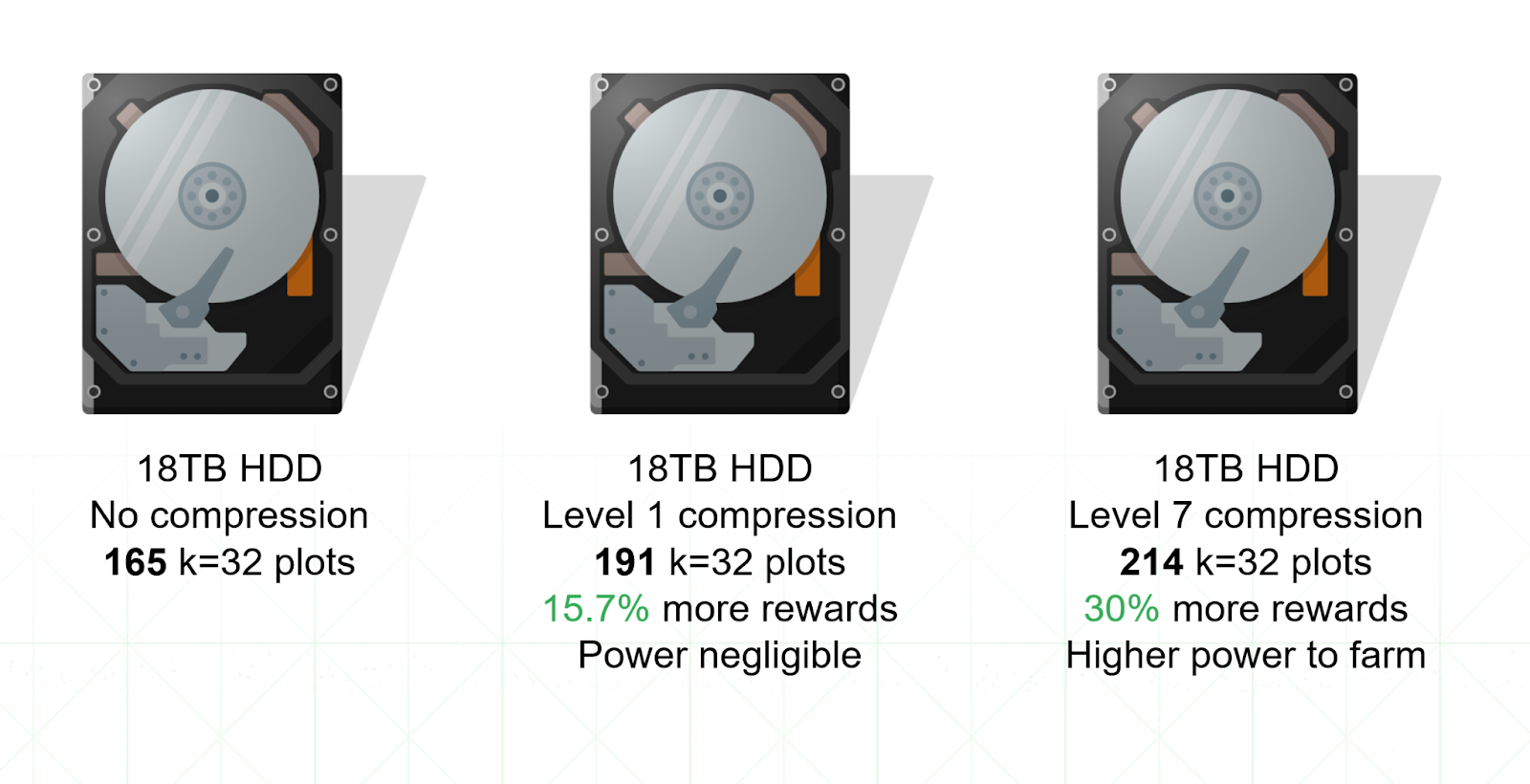 The Chia Network, which is best known for pioneering cryptocurrency farming with hard drive space (dubbed PoST, or Proof of Space and Time), has recently announced the imminent release of a couple of new features that will significantly shake up the hard-drive-mining space: GPU plotting and higher levels of plot compression.

These changes are a big deal for several reasons: GPU plotting will allow substantially faster plot creation times. Additionally, high-level plot compression will allow users to store up to 30-40% more plots in the same amount of space, thus increasing the amount of plots able to be farmed on a given hard drive.

Read Also: How to Mine Chia (XCH)

This comes with a tradeoff, though. Plots are compressed by effectively leaving out data, the values of which are computed during farming. Consequently, more computing resources are needed for farming, resulting in higher power consumption for your Chia farming rig and associated higher energy costs.

GPUs are ideal for farming Chia coin in this manner due to their superior ability to handle concurrent tasks, but a CPU alone can handle lower-level compression plots up to a certain point. The Chia Network has announced seven compression levels. Each level requires increased computational resources but results in a higher plot density and increases rewards. Level 7 reduces plot size from 101.3 GiB for a K32 to 78.05 GiB, a 22.97% decrease.

Around the same time, madMAx43v3r, a prominent independent developer involved in many Chia-related projects including his popular plotting software, announced the release of his Gigahorse GPU plotter.

MadMax’s software is more advanced, allowing ten levels of compression (since level 0 is compressed in his scheme) up to 68.9 GiB (a 47.2% increase in storage efficiency). It utilizes copious amounts of memory to accomplish this; the recommended spec is 256GB of RAM, but you’ll need at least 128GB. This is due to the fact that MadMax’s plotter builds K32 plots in RAM before moving writing them to non-volatile memory.

GPUs are pretty much requisite for farming higher-level-compression plots, and MadMax will likely be monetizing his Gigahorse GPU plotter with a dev fee, rumored to be 6.5%. Note that this is for the lifetime of a plot, so this dev fee should be factored into any profit calculations along with any pool fees. How Plot Compression and GPU Farming Affects You

If you’re a veteran Chia farmer and have already amassed a sizeable farm, you may be disappointed to learn that your plots cannot be efficiently compressed. Rather, you’ll have to start from scratch and replot them.

Failing to do so will put you at a competitive disadvantage. As more and more farmers migrate to higher-compression plot formats, Chia’s netspace will increase. If your proportion of netspace doesn’t increase proportionately, your share of all block rewards will decline.

Since most large-scale farmers will almost certainly switch to GPU-assisted Chia farming, the netspace should increase by around 20-30% in the coming weeks. Thus, your rewards will decrease by approximately 23% if you don’t replot at higher compression levels, all else being equal.

The recommended minimum specs for MadMax’s GPU plotter are as follows:

The recommended system specs for MadMax’s GPU plotter are:

How to Mine Any Cryptocurrency: The Essential Guide

How to Earn Interest on Your RTM with iNodez Raptoreum Smartnodes