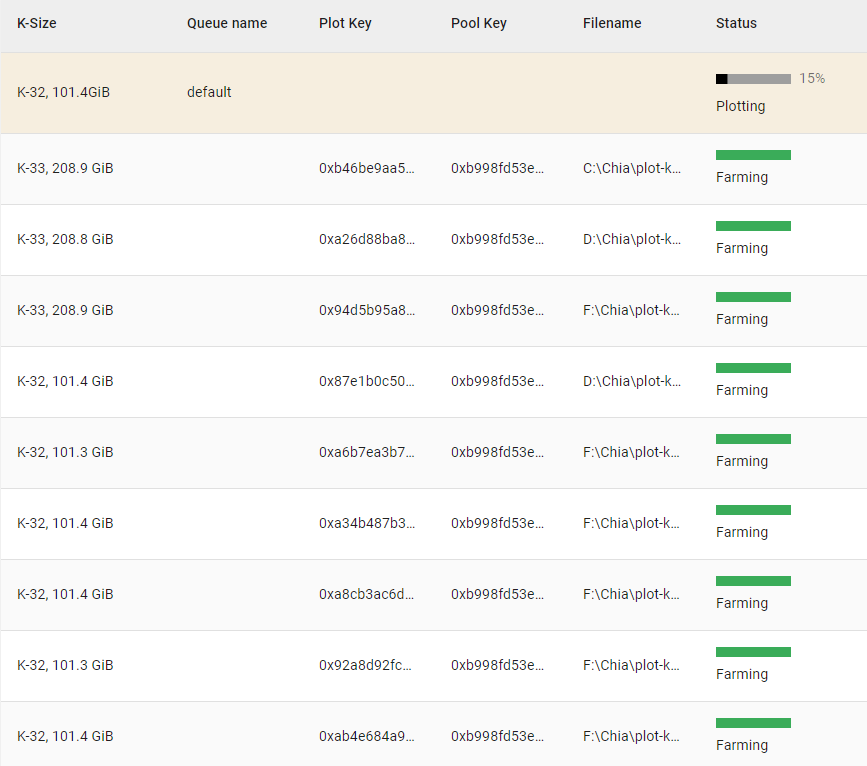 If you’re looking to get into Chia farming and want a dedicated rig to maximize productivity, your best choice may be to custom-build one.

Additionally, there are a variety of excellent pre-built computers on the market that you may want to opt for to minimize the amount of work required to get your farm up and running.

Regardless of which path you choose, we’ll cover what you should look for in a farming rig, as well as the rationale behind these choices. Additionally, we’ll include a parts list for a very cost-effective farming rig that you can build or modify to suit your needs.

If you’re unfamiliar with Chia plotting/farming basics or need a refresher, check out our guides on how to set up a Chia farm and farming best practices:

How to Farm Chia

What matters the most in a Chia farming computer?

These four things are by far the most important in their impact on your Chia farming profitability, as they will affect how quickly you’re able to plot Chia and how many plots you can store.

Drive speed only matters in reference to your plotting drives (these are referred to as “temporary storage” in Chia Blockchain).

The faster your sustained write speed, the faster you’ll be able to plot. The “sustained” part is important because it’s essential to understand that most NVMe drives that have advertised maximum write speeds of 3000+ MB/s will in actuality only write at sustained speeds of 600 or so.

Using enterprise-grade drives like Western Digital’s Gold NVMe will allow you to write at much higher sustained speeds. As a bonus, these drives also wear out much more slowly.

On the downside enterprise drives cost significantly more per GB, so it’s a tradeoff you’ll have to consider. Consumer-grade SSDs are still very effective, so most of the time you’ll want to go with these unless you’re plotting on a very large scale.

These days most current-generation CPUs have a thread count that’s double their core count.

For example, an i5 or Ryzen 5 processor usually has 6 cores and 12 threads, while an i3/Ryzen 3 will have 4 cores and 8 threads.

Thread count matters because for every k32 you plot in parallel, you’ll need at least 2 threads for maximum efficiency.

With this in mind, an i5/Ryzen 5 CPU should be able to plot 6 K32s in parallel, which takes a little over 1.5TB in temporary storage. Keep in mind you could technically plot more than 6 K32s at a time, but speeds would be significantly slower when using less than 2 threads per plot.

Total RAM capacity also caps your parallel plotting capacity. According to Chia’s Blockchain Wiki, 3390 MiB (about 3.5GB) of RAM is needed for each parallel K32 plot (the amount needed approximately doubles with each K=1 increase). With this in mind, it’s pretty easy to do the math:

In a one-CPU setup 32GB will usually be the most RAM necessary, since even high-end CPUs usually cap out at 20 threads (and thus 10 parallel plots at most). If you’re really trying to go all-in, Ryzen’s Threadripper 3960X has an incredible 48 threads, but that would honestly be gross overkill.

Storage capacity is by far the most obvious consideration for Chia farming. You can only farm as many plots as you can store, so it makes sense to accrue as much storage space as possible.

A K32 plot takes up 109 gigabytes of space, so you’ll be able to store a little over 9 plots per terabyte of storage.

What are the best components for a Chia farming rig?

Now comes the fun part: we’ve compiled our picks for the best parts for a budget-friendly Chia farming system.

Intel’s 6-core/12-thread i5-10400 is ideal for farming efficiently. 12 threads will allow you to plot six K32s at a time at good speeds. We chose this over an AMD alternative such as the Ryzen 5 3600 because it’s more affordable and comes with integrated graphics, meaning you don’t need to fork over extra money for a discrete graphics card.

The i5-11400 is technically better-suited for Chia plotting than the generation-older i5-10400 because it supports PCIe Gen 4, which is important if you’re planning to buy the fastest possible SSDs. However, its price is currently heavily inflated due to high demand, so unless you’re using gen 4 SSDs the i5-10400 will be your best bet.

If you want even more plotting capacity, consider the i7-10700 or i7-11700, as these CPUs both have 16 threads (and thus are better-suited for mass-plotting). The same consideration applies to these: If you want PCIe gen 4 we recommend the i7-11700, otherwise the i7-10700 is better suited for a budget.

OLOy may not be as recognizable a brand as Corsair or G.Skill, but they manufacture RAM on par with the best. This RAM kit offers the best price-to-performance available. It’s fast, low-latency, and affordable, and it will support four parallel K32 plots.

The reason we recommend this over a 32GB kit is its cost-efficiency; you’ll pay around double for 32 gigs of RAM and will only get two more parallel plots per batch when using a 12-thread CPU.

For this reason we’d recommend 32GB of RAM primarily for i7/Ryzen 7 or i9/Ryzen 9 builds, since this would be more cost-efficient.

Seagate’s 8TB BarraCuda model is currently the most cost-efficient hard drive we’ve found on a per-GB basis. As such, we’d recommend it for the vast majority of builds. Buy more than one if you want 16TB of storage, as it’s a lot cheaper to buy two of these than one of Seagate’s 16TB drives.

If you don’t want the hassle of plugging in SATA cables and opening up your rig, Seagate also sells 8TB external hard drives at a similar cost.

If you’re trying to maximize the amount of storage you can hold with a limited amount of SATA ports, consider Seagate’s Exos 18TB hard drive instead.

The ADATA SX8200 is an affordable 1TB NVMe with higher sustained write speeds than most consumer drives. It will allow you to create up to three plots in parallel.

If you opt for 32GB of RAM or you want a little bit of extra storage capacity (e.g. you want to download a game or two) we’d recommend a 2TB drive like the Inland Platinum. This will allow you to plot up to seven K32s at a time (six with a 12-thread CPU), or four if you have 16GB of RAM.

We chose the B560M-HDV because it’s one of the most affordable LGA 1200 boards, meaning it will support an Intel 10th or 11th-gen CPU.

In addition, it has four SATA ports, allowing for up to four hard drives. Add to that two M.2 slots, allowing for two NVMe drives, and it’s a very well-rounded motherboard. If you run out of SATA ports, you can also use a PCIe expansion card to allow for even more storage capacity.

Moreover, the B560M-HDV supports PCIe gen 4, allowing for faster M.2 speeds with PCIe gen 4 drives, should you opt for one of these.

Before buying, be sure to look at Asus’ Prime B560M-A motherboard as well. On any given day it may be cheaper than the B560M-HDV, and has roughly the same features.

This 450-watt power supply manufactured by Corsair is well-made and unlikely to quit on you. 450 watts is more than enough for most farming systems, as your processor typically won’t use much more than 120 watts and hard drives will rarely pull more than 30W.

The H510 is a well-made case that allows for easy cable management. It has several drive bays, allowing you to store your farming drives internally.

If you’re using more than a few, though, you’ll likely end up having some drives sitting outside of the case. This doesn’t make for the best aesthetics but it’s truly not a problem.

If you’re really looking to save money and don’t mind if your case has a lackluster design, check out Rosewill’s SRM-01B. It’s about half of the cost of the H510, and will definitely get the job done.

By default, this rig comes with 8GB of dual-channel DDR4 RAM (which can support two parallel plots at maximum speeds), with the option of upgrading to 16GB or 32GB.

Make sure to select at least the 512GB SSD over the base-level 256GB. You’ll need this for plotting a K32, since it takes about 256GB to do so (and you won’t have quite that much storage left since Windows 10 and any programs will take up storage).

With our recommended configuration (512GB SSD and default components the rest of the way), the HP Envy TE01-2250xt costs $590, which is why we feel it is one of the best options for a budget Chia farming rig.

Lastly, you’ll need to add in some hard drives for additional farming capacity. The easiest option is to buy an external USB hard drive like this one, but if you’re familiar with the process of installing an internal hard drive (it’s not hard), you can opt for a SATA model like this.

That’s our take on the best budget Chia farming rig. If you decide to build your yourself, check out our PC-building beginner’s guide for a step-by-step walk through the entire process.

With that being said, there’s no shame in going with a prebuilt either. Just make sure you get one without a graphics card if you’re using it exclusively for farming, as this will add a lot of cost with no return on investment.

Lastly, check out our comprehensive guide to Chia farming if you’re not sure how to go about getting started once you’ve got your rig. Good luck farming, and let us know how you do!

Motherboard Anatomy: Connections and Components of the PC Motherboard