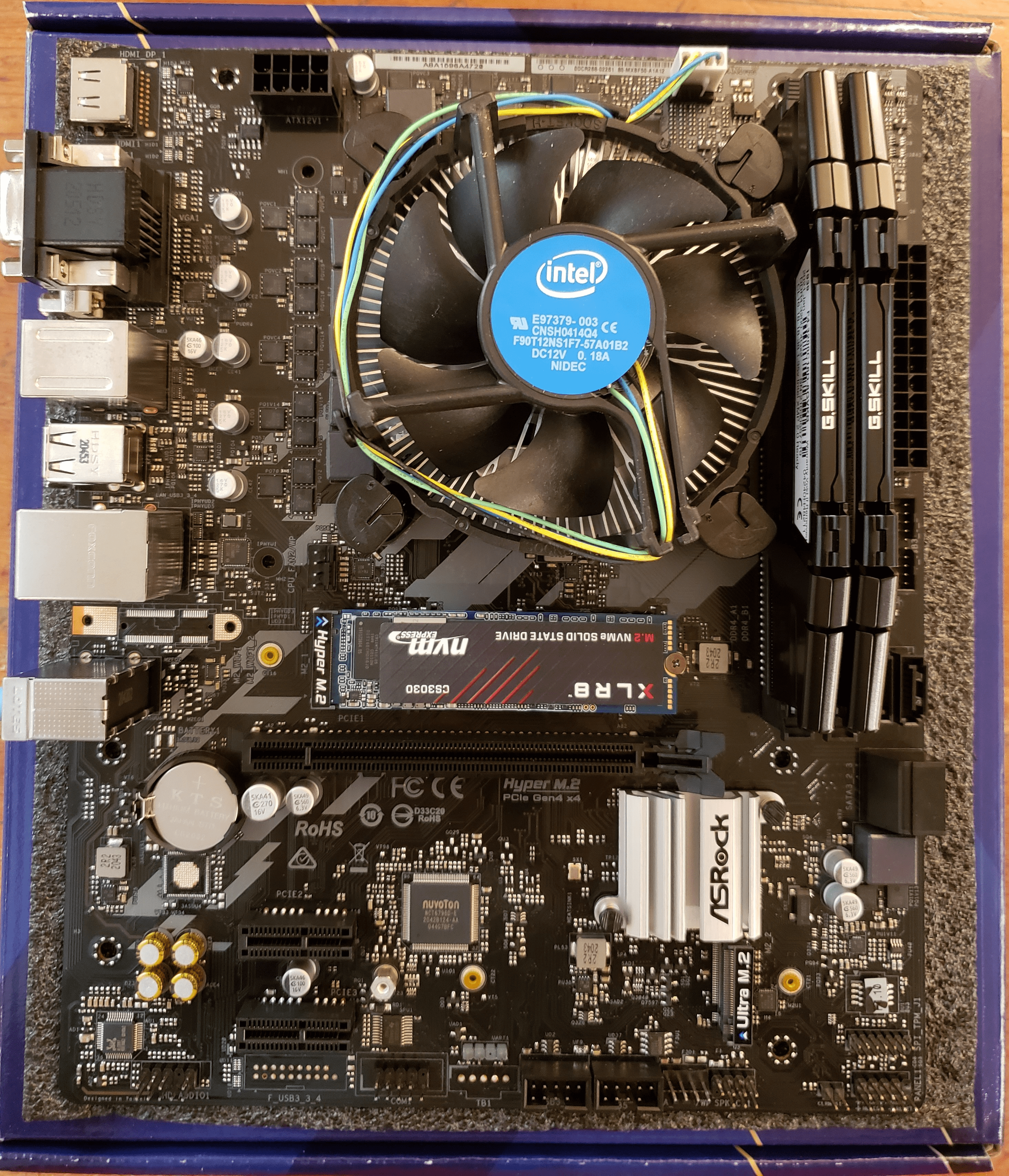 This article is part of our PC-building beginner’s guide. You can view the entire guide here.

What are the parts in a computer?

Before we start talking about selecting components, it’s important to understand the basic function of each part in a computer system.

Each component performs a different function, and each is equally essential. Understanding the role of each part will help you understand the criteria you should consider when building your parts list.

With that in mind, let’s cover all of the major PC components and their respective roles.

What is a Motherboard?

Graphics cards, RAM, the CPU, power supply, and storage drives all connect to the Motherboard. The motherboard allows each of these components to interact with each other via various interfaces, and it supplies power to many of them.

The most important factor to consider when choosing a motherboard is compatibility with other parts, most notably with your CPU, and overclocking support (which we’ll cover more extensively in the next section).

What is a CPU?

The processor, often referred to as the CPU (Central Processing Unit), is one of the most important components of a computer. It’s the component that controls every other component and sends instructions to the rest of your system.

Almost all functions on a computer are performed by the CPU; it even generates the image on your screen if you don’t have a graphics card (as long as it has integrated graphics).

A CPU is made up of multiple internal processors, known as cores. In modern SKUs these cores are typically subdivided into threads, which are effectively virtualized cores. Software sees each thread as a separate entity, and each thread is capable of performing computational tasks separately from the rest.

Nowadays processors typically have two threads per core, so a 4-core model will usually have 8 threads. Some of Intel’s latest 12th generation of processors are exceptions to this rule, since they have a mixture of 1-thread and 2-thread cores.

It’s extremely important to pick a CPU that will be able to handle the workload you demand of it. If your processor isn’t up to the tasks you demand of it your PC’s performance will suffer greatly.

What is a CPU Cooler?

A CPU generates a massive amount of heat, and without proper cooling it will throttle and shut down. A CPU cooler helps avoid this by dissipating heat away from the surface of the CPU and blowing it somewhere else, typically into the case. The hot air is then removed from the chassis with the aid of case fans while cooler air is sucked in on the other end of the case in a continuous cycle.

From there the air is blown out by case fans, keeping your component temperatures low. Thermal paste is applied between the cooler and CPU helps the cooler remove heat from the CPU and keep it from overheating.

There are two main types of cooling systems: Air Coolers and AIOs.

Air coolers are the most common variety of cooling system you’ll run across in the wild. They typically use a combination of a metal heatsink and fan(s) to move heat away from the CPU. All Intel and AMD stock coolers (coolers that come with the CPU) are air coolers.

AIO is short for All-In-One, and in the world of computers it refers to all-in-one liquid coolers. These systems use a constantly cycling loop of water or another liquid to cool your CPU.

Cool water runs by the processor, and heats up as the CPU transfers heat to it. It continues around the loop and is cooled by a radiator, and the cycle continues.

What is a Graphics Card (GPU)?

The graphics card, often also called the GPU (Graphics Processing Unit) or video card, renders the images you see on your screen. Typically graphics cards are only needed by people building a PC with the intent to run games or graphical design software, although some people use lower-end graphics cards in conjunction with CPUs that don’t have built-in (integrated) graphics.

It’s important to note the technical distinction between a GPU and graphics card. While the two terms are often used interchangeably, they actually refer to slightly different things. A GPU is technically the chip that is responsible for generating graphics, while a graphics card is an expansion card that is connected to the motherboard.

A graphics card is made up of many components including printed circuit board, memory, power connectors, heatsinks, voltage regulation modules (VRMs), PCIe connectors and of course a GPU. GPUs don’t only exist in graphics cards, though.

Some processors are equipped with an integrated GPU (iGPU) which allows users to build a fully functional computer without a video card. These GPUs are far less powerful than those found in the typical dedicated graphics card, making them less suitable for GPU-intensive tasks.

What is a Storage Drive?

The storage drive(s) in your computer are what determine its storage capacity. There are two main types of drive: HDD and SSD. Furthermore, the SSD category is broken into 2 types of its own: NVMe and SATA.

HDD: HDD stands for Hard Disk Drive. Hard drives have been around for much longer than SSDs. Hard drives are more cost-efficient (meaning you can get more storage for less money) but not nearly as fast at data retrieval.

SSD: SSD stands for Solid State Drive, the more recently-developed storage drive. SSD’s retrieve information much faster, making them highly desirable. This means your system will also boot faster when using an SSD. The downside of this is that they cost a bit more per gigabyte of storage, so it isn’t always feasible to have an SSD if you’re on a budget.

This is an incredibly superficial overview of PC storage. For a more in-depth look at storage, read our full-length guide to PC storage technologies and terminologies.

RAM is short for Random Access Memory, and the amount of RAM you buy will determine how much temporary data you can store for near-instant access.

RAM is a type of volatile memory (meaning it’s wiped clean when the power to your computer is cut off). It interfaces with your CPU far faster than even NVMe drives, making it ideal for storing small amounts of temporary data. Whereas storage drives frequently come in capacities ranging from 250GB to 8TB or more, RAM kits come in much smaller sizes such as 4, 8, 16, 32, 64, or 128GB.

Memory also allows you to switch between different programs or tabs quickly. One of the most common ways in which RAM capacity affects the everyday user is in Google Chrome (or your respective Internet browser). The more RAM you have, the more tabs you’re able to keep open at the same time without having to wait for the page to appear upon switching.

It’s easy to see why: HTML files for each webpage are stored in RAM, and the amount of pages is limited by your memory’s total capacity. Once the sum of the file sizes exceeds the amount of available memory, your computer is forced to shift this data to long-term storage (SSDs or hard drives). When you switch tabs, your CPU must retrieve that page’s data and does so far more slowly.

What is a Power Supply (PSU)?

The power supply unit, sometimes abbreviated as PSU, is your computer’s power source. It directs electricity from a wall outlet to your computer’s motherboard, where it can be distributed to all of the components as needed.

What is a PC Chassis?

The chassis, commonly called the “case” or “tower”, is the part of the computer you see. Computer cases come in three main sizes: Full tower, Mid tower, and Mini tower.

Unless you need to store your computer in a very small compartment, Mid or Full towers are the best option. If you get a Mini tower you’ll probably need to get a smaller form-factor ITX motherboard, which will cost you more money than a standard one.

The case holds all of the components inside, and is the hub to which you connect almost all external cables. These include display cables like HDMI and DisplayPort, USB connectors, Ethernet cables, audio jacks, and more.

What is a Monitor:

The monitor is not technically part of the PC, but it is essential to the function of the computer. It is the screen that displays the images your computer generates.

Your monitor is important because it determines the smoothness and resolution of the image you see when running games or during everyday use.

This is Part 1 of our PC-building beginner’s guide. You can find an overview of the entire guide here.

Art of PC is reader-supported; we may earn a commission if you make purchases through our affiliate links. Thanks for your support!

How to Pick your PC Parts: Component selection basics