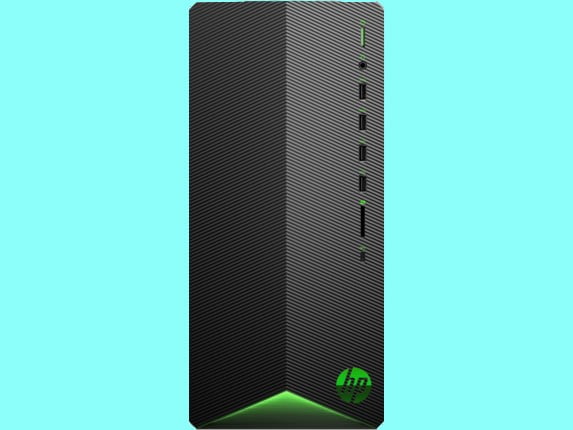 Whether you’re in the market for a brand new PC or just a new graphics card, unless you’re a multimillionaire or close to it your options are somewhat limited. You can pay scalper prices for a GPU, cross your fingers and hope for the privilege to pay nearly that much if you win the Newegg Shuffle, do nothing at all, or buy a prebuilt PC.

Right now prebuilt rigs are looking better than ever, as they seem to be the only way for most users to acquire one of Nvidia’s newest 30-series graphics cards without working three jobs or delaying retirement by a decade. And one of the best-priced prebuilt rigs at the moment is HP’s Pavilion TG01-2176z, one of their few RTS (ready to ship and non-customizable) prebuilt gaming PCs. Let’s take a look at its hardware and how it performs in-game to get a better idea of whether or not it’s the right rig for you.

Aside from price, the most important question when considering a gaming PC is “what’s in it?” In this section we’ll answer this question in regards to the Pavilion TG01-2176z.

As the ceiling on your in-game performance, the graphics card is without question the most important piece of hardware. The TG01-2176z doesn’t disappoint; it comes packed with Nvidia’s RTX 3060, a stellar GPU that can handle 240FPS in 1080p with great aplomb. It’s not bad for 60FPS gaming in 1440p either, but if you’re running really demanding games you might need to dial down the graphics a tad. We’ll cover this more in our benchmarks.

You’ll typically pay at least $800 for an RTX 3060 in the wild, and that’s on the low-end. With a price of $1299.99 for the entire rig, this means you’re effectively paying about $500 for the entire rig minus the GPU. Considering the quality of the rest of the rig, that’s not too shabby.

AMD’s Ryzen 7 5700G is a powerhouse 8-core, 16-thread CPU that comes with the bonus of 60FPS-capable Vega 8 integrated graphics. Hopefully you’ll never need them but it’s nice to have a fallback plan if your GPU quits on you unexpectedly, and that’s something that the majority of Ryzen processors don’t offer.

Not only is this CPU great for gaming (it will keep up with the RTX 3060 at any resolution or quality), but it’s also well-suited for heavy computing tasks. If you spend a lot of time editing videos and the like you’ll be especially glad for the firepower. The 5700G is cooled with a standard air cooler.

The RAM in this build is nothing fancy. There aren’t any slick heatsinks or RGB lighting, but that’s the tradeoff when you choose a Pavilion rig over the Omen series. The good news is that the side panels aren’t transparent, so you won’t be looking at it anyway.

Thankfully aesthetics don’t affect memory performance, and this dual-channel 16GB kit works as advertised. It comes out of the box running at a solid 3200MHz. In an ideal world HP would have spent a few dollars more and bought 3600MHz RAM (the golden standard for AMD CPUs), but the difference in performance is small enough that you wouldn’t be able to distinguish the two in a blind test.

This Pavilion make comes with a fairly generous half-terabyte of ultra-fast NVMe storage. The OS is installed on this drive to ensure quick boot times, and room is left for several games. Read/write speeds should be in the neighborhood of 3200/2700 MB/s, as the WD Black SDPNTY in the Pavilion is the same that we benchmarked in the Omen 30L.

An additional 1TB of backup storage is provided in the form of a standard SATA hard disk drive. This drive is a 7200RPM model, meaning it’s on the faster end of the spectrum as HDDs go. Don’t expect it to win any data retrieval races for you, but it gets the job done for storing the bulk of your files. The combined 1.5TB of the NVMe and HDD should last most users a long while before additional storage is needed.

As is the case with most of HP’s prebuilt rigs the motherboard is a generic model. It comes with WiFi and Bluetooth 5 support so you won’t have to hard-wire your Internet (although it’s recommended if possible). Obviously the CPU socket is AM4, meaning if you wanted to upgrade to a 5900X or 5950X for any reason you’d be able to. Ryzen’s 6000-series is rumored to use the new AM5 socket type, so the 5950X is likely to be the best compatible CPU (and a good one at that).

If there’s one complaint we have with the HP Pavilion TG01-2176z, it’s that the power supply is only a 400W. Nvidia’s official recommendation for the RTX 3060 is a 550W power supply, which means you’re leaving minimal headroom.

Even so, this is unlikely to cause any problems. Nvidia’s tests with the RTX 3060 used to determine recommended PSU wattage were conducted with a Core i9-10900K, a processor that can peak at well over 200 watts of power consumption. Meanwhile, the R7 5700G maxes out at around 70W. 80-Plus gold efficiency means a large proportion of that power reaches your system. Thus, while we’d prefer to see a 550W power supply it almost certainly won’t come into play unless you upgrade your GPU down the road.

The case is nothing special; it’s not ugly by any stretch but depending on your style it may be more of an under-the-desk chassis. As far as connectivity goes, there’s plenty of room for expansion. The front panel holds a USB-C port, four SuperSpeed USB-A (standard USB) ports, and a combined audio/microphone jack that’s ideal for headsets.

No monitor is included with the TG01-2176z. Depending on your desired resolution and framerate, the following are good options:

A cheap keyboard and mouse are included but they probably won’t meet your standards. We recommend the Razer DeathAdder v2 or Glorious Model D and the Razer Huntsman Mini, but this largely boils down to personal preference.

Let’s take a look at the framerates you can expect from this rig. We’ve provided benchmarks in several titles at various settings and resolutions, courtesy of Random Benchmark and several other channels.

Depending on what you’re trying to play, the Pavilion TG01-2176z and its RTX 3060 should be able to crank out upwards of 100FPS with performance-oriented graphical settings in 1080p. Even with these maxed out you can expect 60FPS in just about anything.

While the 3060 is best-suited for 1080p, it can handle running most games at 1440p. For tougher titles like CyberPunk consider dialing down the graphics a tad or enabling DLSS to reach the 60FPS mark.

Lastly, let’s break down the value of the Pavilion TG01-2176z by comparing its price to that of its individual components on the market. Prices are constantly changing so this is an inexact science, but we’ll do our best to present an accurate idea of what this rig would cost to build yourself.

Since the motherboard is a generic model we chose the B550 chipset as a surrogate. We similarly substituted a 550W power supply since 400W models are exceedingly rare and expensive, especially high-efficiency ones. We suggest verifying these prices with your own research to account for potential market changes.

It’s also important to note that the above parts list doesn’t have the additional bonus of integrated WiFi and Bluetooth.

In total the Pavilion TG01-2176z’s price of $1300 is currently $314 cheaper than the rough market price of $1614. Even excluding the operating system, HP’s system is $184 less than market price. All things considered, this rig represents a compelling option for mid-range gaming performance that doubles as a powerful workstation.