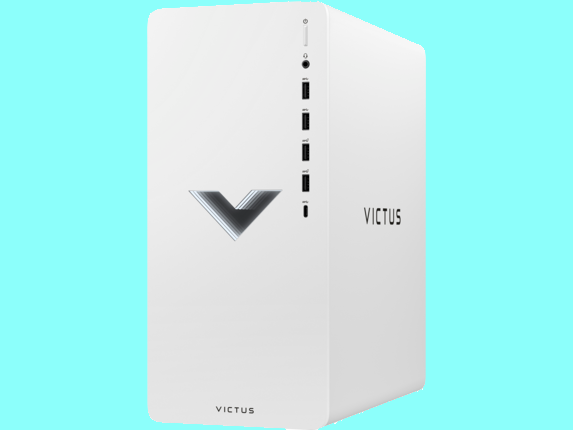 HP’s Victus line has traditionally been limited to laptops, but with the newly-released Victus 15L it has officially transitioned into the realm of desktop gaming PCs. The 15L is HP’s best budget offering to date, packing 1080p 144FPS-capable hardware for less than $900 in some SKUs. In this review of the Victus 15L we’ll take a look at potential configurations, hardware specs, value, and more.

In contrast to HP’s Pavilion product lineup, which falls into much the same price range as Victus and features less-than-incredible aesthetics, most users will find the 15L’s design quite pleasing to the eye. The Victus 15L is available in two colors: Ceramic White (shown above) and Mica Silver (which is actually quite dark, more a slate gray).

The Victus logo, a stylized V, is emblazoned dead-center (and features customizable RGB lighting), with VICTUS scrawled across the bottom and 15L shoved into the lower left corner of the side panel for good measure.

Aside from the front-facing USB ports the front panel is a smooth, unbroken surface. While this is less than ideal for airflow, it’s good for appearance. Overall, then, the Victus 15L’s appearance rivals that of even the mighty Omen 45L, albeit in a more toned-down manner.

Internal components can be easily accessed by removing a single screw in the rear and sliding the left side panel towards the rear of the chassis. Where case fans are concerned, the15L features only a single rear exhaust fan.

At the time of writing (August 2022), the Victus is available in four different models; two are ready-to-ship (meaning no wait time for assembly) while two are customizable. Of the ready-to-ship models, there’s one with a Core i7-12700 and RTX 3060 and another featuring a Ryzen 7 5700G and Radeon RX 6600 XT.

For the purpose of this review we’ll look at the TG02-0346ST, as this was the first model to be released. Most of the observations made in regards to this SKU apply to all of the rest, with the exception of comments regarding a build’s ready-to-ship status.

HP Victus 15L TG02-0346st
4.6
$649.99
Buy at HP.com Buy on Amazon
Art of PC is reader supported. We may earn a commission if you make purchases through our affiliate links. Thanks for your support!

The Intel/Nvidia build is currently $1050, while the Ryzen build is $150 less at $900. The main advantage of the pricier Nvidia-powered rig is the better-developed features that come with RTX-series graphics cards, namely DLSS and ray-tracing. With these technologies users can achieve better framerates in high resolutions (like 1440p or 4K) and render more realistically.

The RX 6600 XT has similar features, but they’re not as refined and therefore less efficient than the 3060’s. If you don’t plan on using DLSS or RTX (Nvidia’s ray-tracing technology), there’s little reason not to save the extra $150, as the systems are otherwise virtually identical in terms of potential framerates, and sport the same 1TB NVMe SSD and 16GB of DDR4-3200MHz RAM.

With that being said, both of these RTS models are incredibly priced, as they undercut both competing prebuilt PCs of similar performance and self-built computers of the same caliber.

Next, let’s take a look at the customizable SKU known as the TG02-0346st. With this model all components are configurable, so you can tinker with the parts list to maximize performance within your budget. The available options are as follows:

The Victus 15L’s addition of Intel’s newest 12th-gen CPUs means that even the base configuration (with the Core i5-12400) packs quite the punch. The i5-12400 performs roughly the same on all cores as the two-generations-old 8-core i7-10700K, an impressive feat for a six-core budget chip.

For this reason, we highly recommend opting for the i5 CPU. The i7-12700 comes at a $200 upcharge and the extra cores and performance won’t be needed by most, as the GPU will be the system bottleneck in most games, even in conjunction with the i5-12400.

Speaking of graphics cards, a case could be made for any of the options aside from the RX 6600XT. The 1660 Super can handle 144FPS in many titles if you lower the graphical settings and stick to 1080p, while the RTX 3060 and 3060 Ti allow higher settings and more consistent framerates at this resolution. Your decision will come down to what games you intend to run.

Should you opt for anything above the 1660 Super, the 500W power supply is requisite. Even with the base configuration, it’s far better to fork over the extra $25 for the 500W PSU, as the official recommended spec for the 1660 Super is 450W.

With memory, you’ll want at least 16GB. This presents a problem, though, as HP charges $100 extra for an additional 8GB of RAM when you could buy a kit of the same size for far less. We recommend buying and installing your own RAM unless you have a strong desire to avoid this; it’s far more economical.

Ditto with SSDs and backup storage; if you want more than 256GB of storage you’re best off opting for the base model and installing more of your own. 1TB SSDs are often $100 or less, far better than the $170 extra you’ll be charged for HP to add one in. Plus, you’ll have an extra 250GB that’s practically “free.” If you need more cheap storage, 2TB hard drives are usually less than $50.

Thus, you save approximately $18 plus the time of assembly buying the base-configuration Victus 15L TG02-0346st versus sourcing parts and building yourself.

It becomes a bit less of a deal when you start looking into upgrades (this is probably where the majority of HP’s profit is made). As we detailed earlier, if you’re looking for anything above the base configuration that isn’t a graphics card or CPU, you’re probably best buying these components aftermarket and installing them yourself. HP Victus 15L TG02-0325m
$629.99
Buy at HP.com Buy on Amazon
Art of PC is reader supported. We may earn a commission if you make purchases through our affiliate links. Thanks for your support!

The issue is not necessarily that it’s poorly priced, but rather that the 1660 Super rig brings substantially better performance to the table at only $20 more. As such, we won’t spend much time on the TG02-0325m; suffice it to say that at its current price you’re better off buying the 1660 Super model.

It’s fairly safe to say that HP’s Victus 15L is currently the best value prebuilt PC, at least in its base 1660S-Core i5-12400 configuration. Its price of $850 is at least $100 better than competing models with similar specs. Additionally, the majority of these feature weaker10th or 11th-gen Intel processors or 3000 or 5000-series Ryzen CPUs, creating even more of a value discrepancy.

Some examples of competing SKUs include SkyTech’s Archangel and Blaze, Acer’s Predator Orion 3000, and CyberPowerPC’s i5-10400F 1660 Super model. It’s important to note that most of these PCs do have more in the way of aesthetics (glass side panels and more extensive RGB lighting) than the Victus 15L, so be sure to factor this in.

HP’s main competitor, Dell, only has three desktop PCs available for less than than $1000, and even the best of these comes with no video card. Thus, they don’t really offer any competition in the 15L’s target price range.

If you’re shopping around for prebuilt gaming PCs, there’s a very good chance you’ve come across HP’s Omen line of desktops. These include the Omen 25L, 30L, 40L, and 45L, which for the most part increase in power as you go down the line. So, what’s the difference between these and the newer Victus product line? One big thing is aesthetics. Victus 15L PCs feature an entirely different chassis than Omen makes. While Omen designs vary somewhat between models, front intake fans with customizable RGB-lit rings around them and a see-through glass side panel are constants among all of them.

In contrast, as detailed in an earlier section, the Victus has a somewhat simpler design and a solid side-panel. With the lack of a see-through side panel comes less RGB lighting, as it is no longer practical (since it wouldn’t be seen anyway). The CPU cooler, DIMMs, and graphics card, which come standard with RGB lighting in Omen models, lack this feature in Victus models.

In terms of hardware, Victus PCs have fewer case fans than Omen makes, and less DIMM slots (two versus the Omen’s four) built into the motherboard. One of the most important distinctions aside from these is that Victus PCs use air coolers, whereas Omen ones have the option to opt for liquid CPU coolers.

The highest-end Omen model, the Omen 45L, also features advanced cryo-chamber technology which helps keep your CPU as frosty as possible, while the 15L lacks this functionality. Note that this is exclusive to the Omen 45L and doesn’t apply to any other Omen makes.

Finally, Victus PCs tend to be cheaper than comparable Omen models. They’re intended to cater to buyers with a tighter budget, so they don’t waste money on aspects that don’t improve performance. This is apparent when looking at pricing: When we customized an HP Omen 25L to match the exact specs of the RTS Core i7-12700/RTX 3060 Victus 15L make, it ended up costing $1808.99 instead of $1399.99 (costs given are retail, not sale, prices). Victus is the absolute best in terms of cost-optimization.

If you want all of the bells and whistles and aren’t on a tight budget, or are building a top-tier rig with the likes of an RTX 3090 or Core i9-12900K, you may be the Omen lineup’s target audience. Just note that much of the additional money you’re paying is largely spent funding RGB lighting rather than actual improved performance.

All in all, then, HP’s Victus 15L is an extremely solid option in the current market if you’re looking for an affordable gaming PC that can push 144FPS. While they could have certainly done a better job of fairly pricing memory and storage upgrades in their customizable rigs, the 15L’s base configurations stands out as true value offerings.

The only real downside is wait time: Customized PCs typically require around a month of handling time, after which the 15L is shipped. This means that you could be waiting for around five weeks to actually take your new rig for a test run. This can, of course, be avoided by purchasing a ready-to-ship system.

There are very few downsides to either of the RTS models at their current pricing; they’re currently cheaper than the total cost of their components in the wild. The only real tradeoff is their relatively plain design; if you’re looking for a glass side panel or robust RGB lighting the Victus 15L disappoints.

Considering everything, HP’s Victus 15L is, at its current pricing, the best value mid-range gaming PC on the entire market. You don’t see Ryzen 7 / 6600 XT PCs going for $900, or Core i7 / RTX 3060 builds going for $1000; the only other computer we’ve seen at comparable prices was Lenovo’s IdeaCentre Gaming 5i, which is sold out at the time of writing.

Thus, while we always recommend building your own PC when possible, if you’re set on buying a prebuilt PC you can’t go wrong with the Victus 15L. OMEN 45L Desktop GT22-0450t Buy at HP.com
Art of PC is reader supported. We may earn a commission if you make purchases through our affiliate links. Thanks for your support!