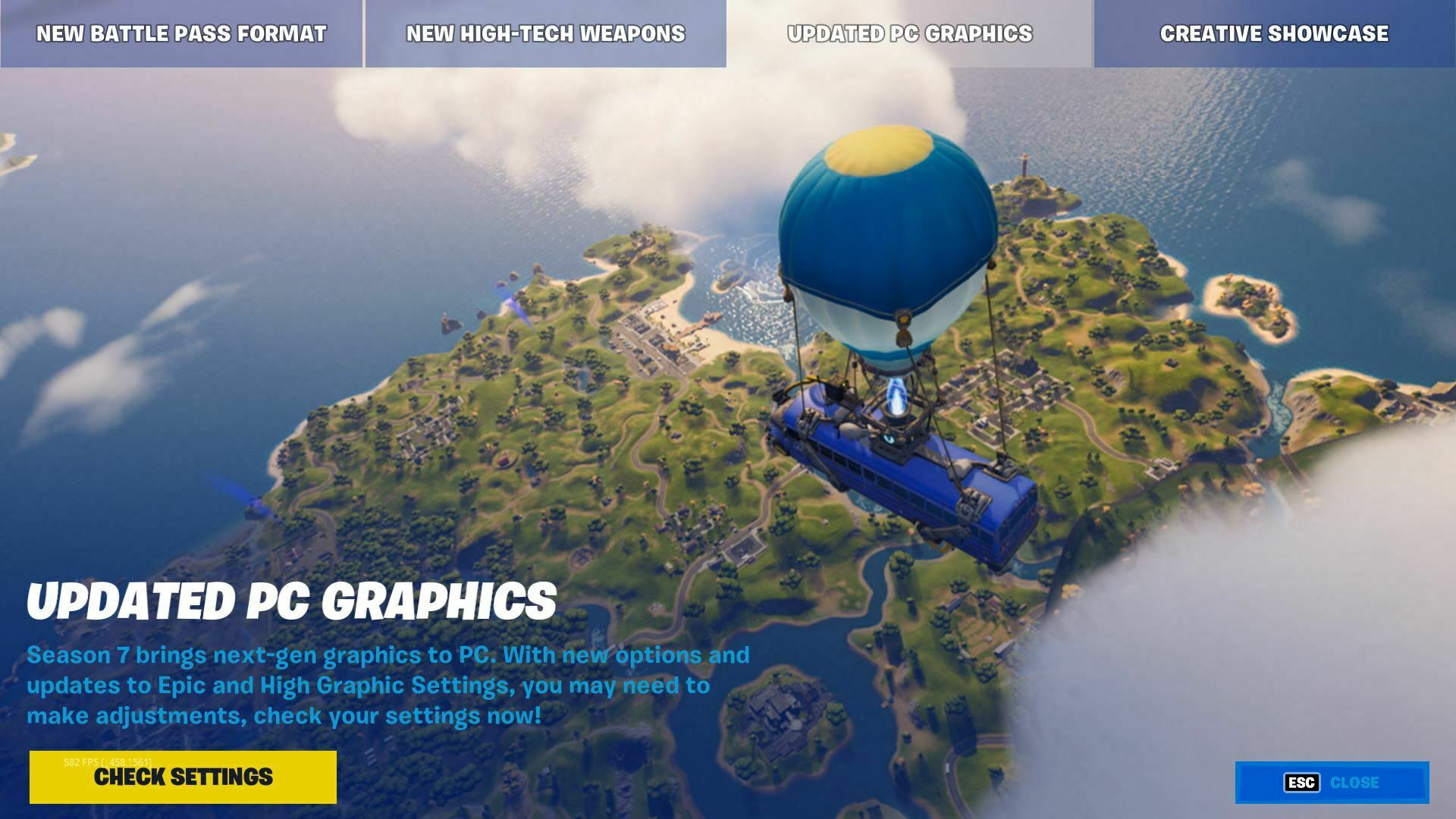 Fortnite announced in a June 3 post that they would be rolling out a graphics update upon release of Chapter 2, Season 7 on June 8.

With Season 7 here we’re taking a look at these graphics changes and what you can expect from them, in regards to both picture quality and performance.

What did Fortnite’s graphics update change?

These graphics upgrades introduce advanced effects, especially centered around explosions that you’ll come across when shooting cars, gas cans, and other volatile items on the island. Improvements have also been made to slurp juice splash and fire effects.

Additionally, Epic Games has updated their shadow effects, so expect these to look a bit more realistic.

Which settings will the graphics update affect?

These graphics changes will only affect the High and Epic presets; Performance Mode Alpha, Low, and Medium presets will be entirely unaffected.

From what Epic states in their blog post, it appears that the High preset will take over the role that the Epic preset formerly held. In other words, if you used to run Fortnite at maximum settings, you can expect roughly the same appearance in Chapter 2 Season 7 when running at High.

This means that the Epic preset will offer the best graphics available to date, and the most realistic effects.

What do I need to run Epic settings?

With the release of v17.00 (C2S7), Epic Games has also released system spec recommendations for the Epic quality preset.

The specifications are as follows:

These are pretty stringent specifications, especially considering the difficulty of acquiring a good graphics card at the moment.

In order to compare the effect of the update on performance, we benchmarked the game at both High and Epic presets with our RTX 3080.

We just so happened to record benchmarks during the middle of Season 6 when we were testing our newly-acquired RTX 3080, which you can view below. Keep in mind there’s typically a 5-10FPS drop associated with GeForce Experience (our recording software), so average FPS would be slightly higher if we weren’t recording.

If you’d rather skip to the results (we’d recommend it), we display them all at the end of the video.

Our final results for the Chapter 2 Season 6 benchmarks at High and Epic presets were 211FPS and 166FPS, respectively.

Meanwhile, when tested this season (this time without GeForce Experience, thus reflecting maximum FPS), we saw framerates of 185 and 172 at High and Epic.

In other words, our High-preset FPS took a pretty sizeable hit (26FPS, or a 12% loss), but Epic was largely unaffected. In fact, we actually saw better performance in Season 7, although this was almost definitely due to game-to-game fluctuations as well as GeForce Experience.

How will the graphics update affect you?

If you have a card with a lot of VRAM (like the RTX 3080 with 10GB), you won’t be affected as severely as if you have low VRAM. In our instance, nothing really changed, since we’d likely cap our FPS at 144 when playing at high resolutions, anyway.

If you were already dangerously close to your preferred threshold (like 60 or 144FPS), the update may impact you more substantially.

The good news is that, in the worst case scenario, you can switch to the High preset to get the same graphical experience, more or less, that you had before.

What is the best graphics cards for Fortnite?

If you’re thinking about upgrading your GPU or building a new PC to play Fortnite at a higher FPS post-update, here’s a few of our handpicked favorite graphics cards for the best Fortnite experience.

Your ideal graphics card will depend on the kind of performance you want; if you just want 60FPS at 1080p, you won’t need to spend nearly as much as if you want to play in 4K.

Even in DX11 or DX12 on Competitive settings (Epic view distance, all other settings Low), the 1650 Super averaged over 240FPS in benchmarks, although you can expect some occasional drops below that threshold.

If you want to play at high resolutions this isn’t the card for you, but it can handle High settings at 60FPS in 1080p.

The non-Super GTX 1650 deserves an honorable mention; it manages very similar performance to the 1650 Super at a reasonable discount.

The RTX 3060 packs some serious performance. You can count on it for steady 60FPS on Epic settings in up to 1440p (in 4K it won’t quite hit the mark).

There are only a couple of reasons you’d need a higher-end graphics card:

If none of these apply to you but you feel that the 1650 Super isn’t quite good enough, the RTX is probably the best choice for you.

If you’re looking for a prebuilt gaming PC with the RTX 3060, we recommend HP’s Omen 25L.

Last but not least, we have Nvidia’s RTX 3080. This monstrous card can handle just about anything you can throw at it (for reference, see our RTX 3080 Fortnite benchmarks).

For this reason, we’ve chosen the 3080 and not the more-potent RTX 3090. It’s much more affordable, and hits the mark on every common high-performance threshold.