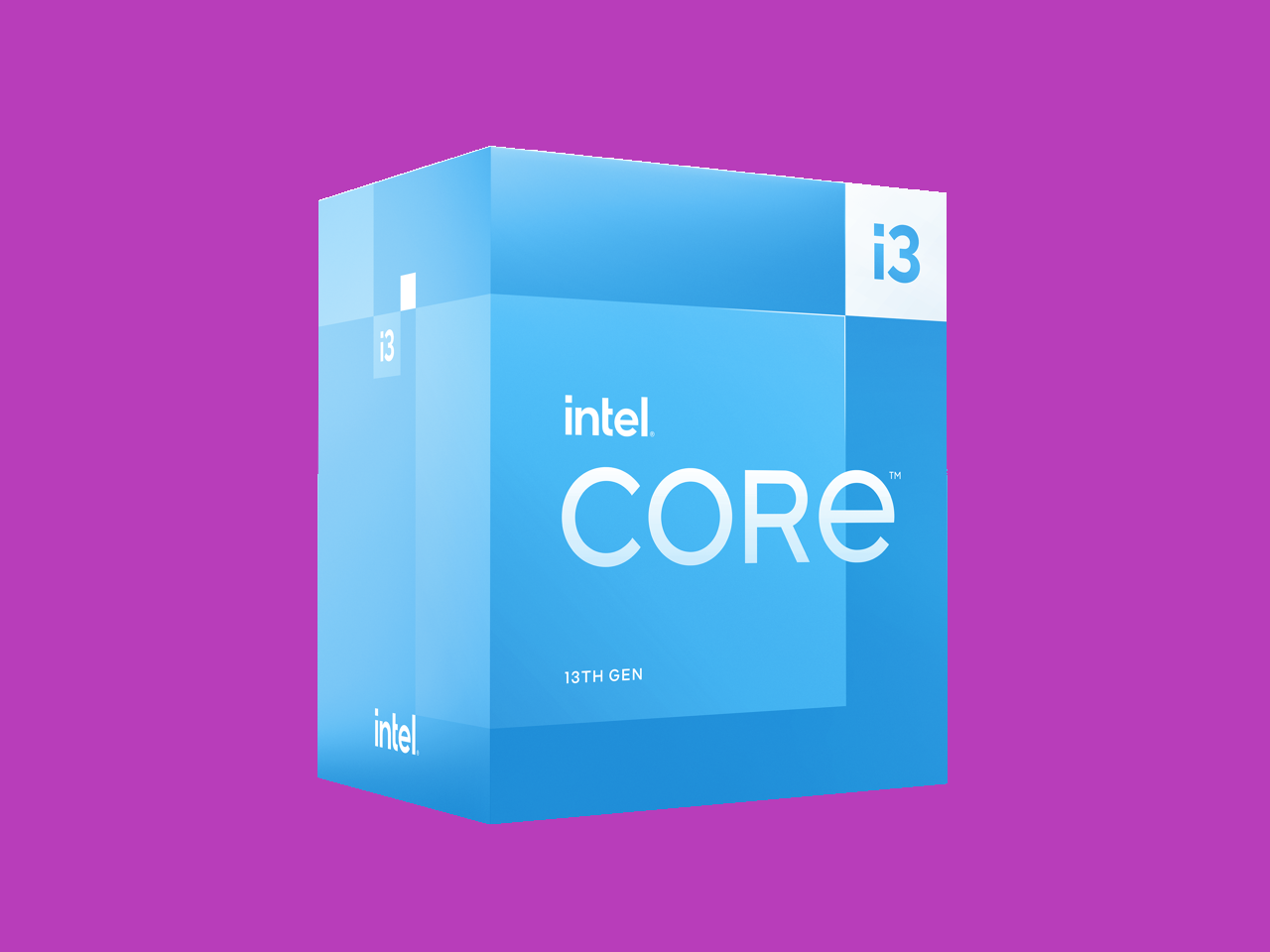 Intel’s recent XX100 CPUs such as the Core i3-10100 and more recent Core i3-12100 have been stalwarts in terms of budget gaming performance, and the latest Core i3-13100 doesn’t disappoint in its continuation of this trend.

Recently released benchmarks by RandomGamingHD show significant gen-on-gen performance improvements, as the Core i3-13100 outperforms the last-generation, higher-denomination Core i3-12300 across the board.

The only Raptor Lake CPU designed without Intel’s efficiency-focused E-cores, the Core i3-13100 features 4 Performance cores for a total of 8 threads. It’s clocked to 3.4GHz out of the box, and reaches speeds of up to 4.5GHz with Intel’s Turbo Boost engaged.

Like the rest of the Raptor Lake lineup, this CPU supports both DDR4 and DDR5, and its LGA 1700 socket type means it’s compatible with any Intel 600-series or 700-series motherboard.

Actual market price can deviate somewhat from recommended pricing, as shown by the 13100’s current cost of $150 on Newegg and the 13100F’s $125 price tag. We expect to see these creep closer to MSRP as these 13th-gen i3 processors become more widely available.

In Cinebench R20, a popular benchmarking software used to test CPU single and multi-core performance, the Core i3-13100F scored 3438 in multi-threaded and 673 in single-thread tests.

Most importantly, RandomGaminginHD benchmarked the Core i3-13100F in-game in eight different titles to see how it performs in practice. Unfortunately his test setup makes use of Nvidia’s RTX 3060 Ti, a mid-range graphics card that doesn’t allow the i3-13100F to fully shine in every game since it acts as the system bottleneck in some titles.

It’s impossible to definitively say when a GPU bottleneck is occurring, but based on usage percentages it seems likely that Cyberpunk 2077, GTA V, Forza Horizon 5, and Mafia Definitive Edition were GPU-bound at the tested settings. This means that the actual framerate the Core i3-13100 is capable of achieving is probably higher in these titles in conjunction with a more capable GPU, or at lower graphical settings.

Despite the above shortcomings, these benchmarks still hold a wealth of useful information. Since CS:GO, Cyberpunk 2077, Witcher 3, Marvel’s Spider-Man, and Modern Warfare 2 are all CPU-bound, this data gives us an excellent concept of the Core i3-13100’s capabilities.

Across the board, the i3-13100 is an extremely-capable 60FPS gaming processor. This should come as no surprise, since Core i3 CPUs dating back to 2020 and earlier have fit this bill.

With competitive settings enabled or in less-demanding games like CS:GO, Fortnite, Apex Legends, VALORANT, and Rainbow Six Siege the i3-13100 will easily reach the 144FPS threshold, since the Core i3-12100 did so with less processing power.

With its slightly faster single-thread speeds, the Core i3-13100 should keep pace with and even exceed the six-core Core i3-12400’s performance in games that are largely single-threaded. Of course, in titles that rely on multicore processing it will lag behind, but for a ~$110 CPU its potency is impressive.

When building a PC that’s not intended for gaming, the i3-13100 is the best choice as a $25 upcharge is cheaper than virtually any discrete video card. Additionally, note that market prices can often overlap, so the i3-13100 may be cheaper than the i3-13100F at any given time. If this happens you would, of course, be best off opting for the i3-13100.

Both the Core i3-13100 and its F-series equivalent are available at Newegg, alongside the rest of Intel’s 13th-gen refresh. Several listings for these CPUs can also be found on eBay.

Finally, Amazon has several i3-13100 listings, although it has none for the 1300F as of the time of writing. These listings are overpriced, so Newegg is the best location to buy for the time being.

The Core i3-13100 is an astonishingly affordable 144FPS-capable chip. It takes the crown from the Core i3-12100 as the new king of budget gaming, as it easily beats out older-generation competition as well as any Ryzen CPUs (it’s cheaper and outperforms the Ryzen 5 3600), and it trounces lower-end processors like the Ryzen 3 5300G or Ryzen 3 4100 by a wide enough margin that their marginally lower price tags don’t compensate.

As icing on the cake, its compatibility with sub-$100 H610 and B660 boards mean that, unlike AMD’s newest 7000-series CPUs, the i3-13100 doesn’t require an expensive platform. This is the mark of truly budget-friendly chip, as the entire system is built around the CPU so costs for the entire build must be taken into account.

All in all, then, we are very well-pleased with the Core i3-13100 and 13100F. While they’re not leaps and bounds better than the last generation, they offer adequately increased performance without a corresponding increase in cost, and it’s difficult to ask for much more than that.