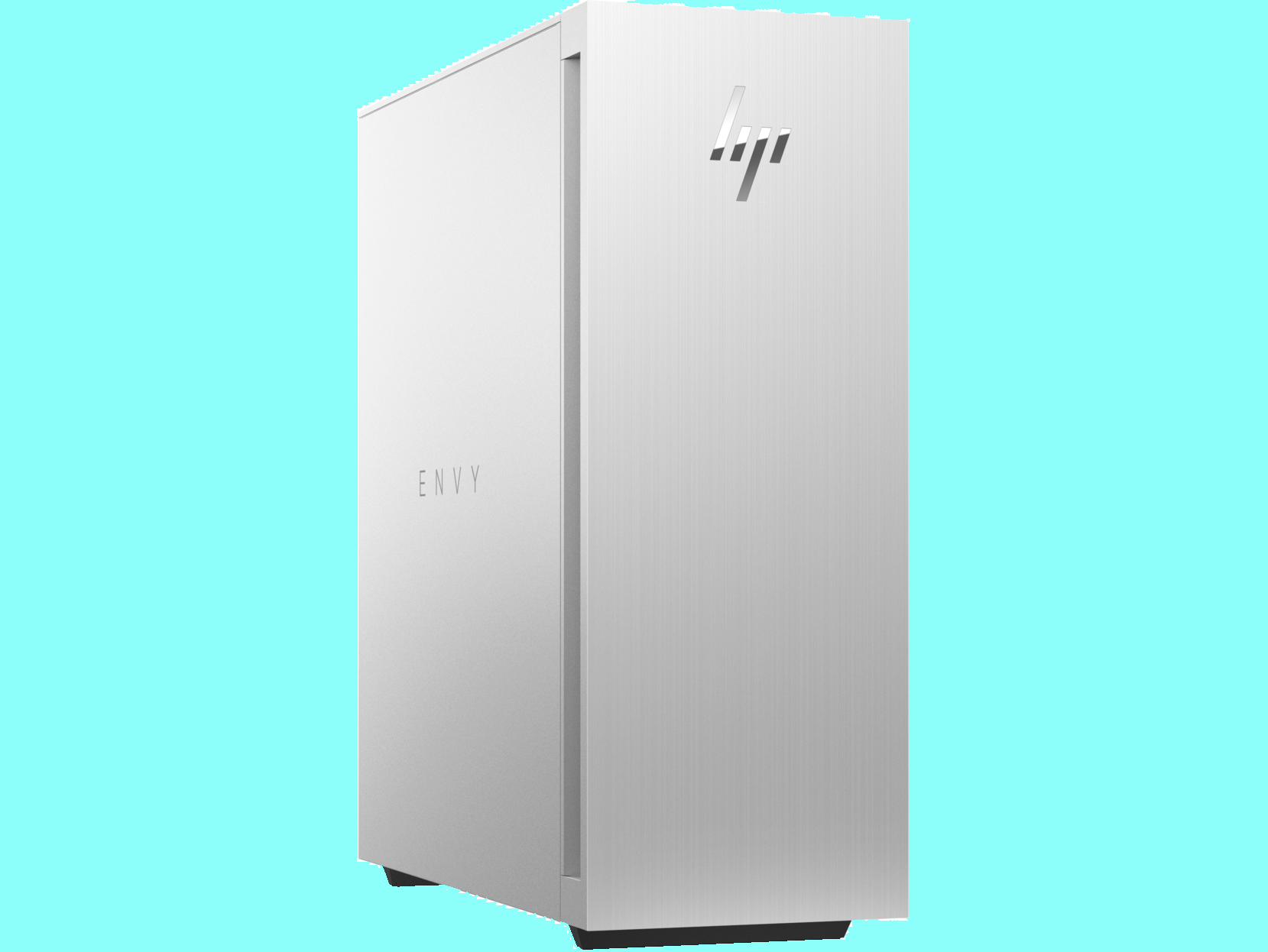 HP has been busy overhauling their prebuilt desktop PC lineup throughout 2022, releasing notable models such as the Victus 15L and Omen 45L, both of which are compelling options in their respective price ranges.

With GPU mining dying and component prices on their way down from all-time-highs this year, prebuilt PCs are less of a must-have than they once were, as building your own PC is once again a budget-friendly option. Still, prebuilt PCs have earned their place in the market and still represent a good choice for buyers at many price points.

In this review we’ll take a look at the newest HP Envy make’s pros and cons, the hardware inside it, its various customization options, and how it stacks up against both other prebuilts and building your own PC. HP Envy TE02-0250XT
$849.99
Buy at HP.com
Art of PC is reader supported. We may earn a commission if you make purchases through our affiliate links. Thanks for your support!

HP usually has at least one customizable variation of a product on their website. Processors, storage options, GPUs, and even your OS can be mixed and matched, with an upcharge for every component that’s an upgrade over the base-level option.

Anywhere from 8 to 128 gigs of memory can be selected, as well as SSDs ranging from 256GB to 1TB. Secondary storage is optional (and costs more since the base level has none), and offers the choice between a 1 or 2TB HDD, or a 512GB or 1TB SSD.

Graphics cards range from the RTX 3050 to the RTX 3080 Ti, and the RX 6600 XT and RX 6700 XT are also available in the unlikely event that you prefer AMD’s cards. Of course, if you select an especially high-powered video card there’s the option to up your PSU from the base 600W supply to a more capable 800W unit.

The TE02-0250XT also comes equipped with WiFi and Bluetooth capabilities, even in the base model, as well as Windows 11 Home.

Note, however, that this product seems almost always to be on sale. For instance, the base configuration is selling at a $450 “discount” at the moment, for a much more reasonable $849.99.

While this isn’t the worst deal ever, neither is it anywhere close to the best. Moreover, the upgrade options, aside from CPUs and graphics cards, are monumentally overpriced compared to market cost. For example, upgrading to 128GB of RAM costs an obscene $780 extra, when an equivalent kit can easily be purchased and installed yourself for less than $400.

Likewise, adding a 1TB NVMe SSD will result in a massive $229 upcharge, when in actuality there are drives twice as fast available for less than $100.

Consequently, if you choose to commission a customizable PC from HP, it’s highly recommended that you keep all components aside from the CPU and video card as close to the base-level as possible and upgrade desired components yourself after purchasing them at market price.

HP Envy TE02-0285t
$1449.99
Buy at HP.com Buy on Amazon
Art of PC is reader supported. We may earn a commission if you make purchases through our affiliate links. Thanks for your support!

The other Envy SKU available on HP’s website is a lot simpler, as it’s a ready-to-ship make with only one available configuration:

The TE02-0285t offers solid value at its current sale price of $1499.99 (retail $1899.99), and is a high-powered machine capable of running most AAA titles at high framerates and resolutions. It’s far more affordable to buy this RTS option than to customize a similar build through HP, making the TE02-0285t a better option for most users.

HP Envy TE02-0187c Buy on Amazon
Art of PC is reader supported. We may earn a commission if you make purchases through our affiliate links. Thanks for your support!

Originally a Costco-specific model, the TE02-0187C has of course been picked up by scalpers and listed on Amazon for a markup. This SKU is one of the best-priced Envy models, but naturally it requires a Costco membership to purchase. While it retails for $1599.99, it’s currently listed for an incredible $999.99.

The TE02-0187c includes the following hardware:

Last but not least, we have the HP Envy TE02-0042. This appears to be an Amazon-exclusive bundle, and the full product specifications can be viewed here.

The TE02-0042 features the following hardware:

Now that we’ve taken a good look at each available model, let’s check out the new design.

Like its predecessor, the case doesn’t offer the best airflow, but added abundant perforation in the top of the newer generation’s case, as well as the traditional real exhaust outlet, should be enough to avoid thermal throttling of components.

The Envy TE02 features three USB-A and one USB-C port up top, as well as an SD reader and a headphone and audio-in jack. The rear I/O panel offers four more USB-A for a total of seven, and three more USB-Cs (one of which is Thunderbolt 4-equipped).

Overall, then, the HP Envy TE02 offers adequate room for plenty of peripherals, and the case is far better-looking than any Envy in the past.

Envy PCs make use of video cards built by HP. These are on the cheaper end in terms of construction and cooling capabilities, and aren’t quite as nice as, say, an EVGA card. To be clear, these cards still utilize the same exact GPU dies, VRAM, and other chips found in any given aftermarket card, they only differ externally.

Thus, despite falling on the lower end of the spectrum, HP’s graphics cards still perform roughly the same as any other card of the same class. For instance, an HP Envy TE02 with an RTX 3060 will fetch the same framerates as any other prebuilt or custom-built PC with any other RTX 3060, so long as thermal throttling doesn’t occur.

If you opt for an Envy build with an SSD, it’s worth noting that the NVMe drives available with the Envy are a step down from those included in the higher-end Omen lineup. While the omen utilizes a WD Black drive with roughly 3200MB/s maximum read speeds, the Envy TE02 uses a different drive rated for 1700 MB/s maximum read and 1550 MB/s maximum write.

While this is half the speed of the Omen’s SSD on paper, the tangible impact on boot or data retrieval speeds in practice is negligible; in a blind test most users cannot discern between solid state drives of different speeds.

For this reason, we recommend not worrying about the drive speeds unless you’re ordering a custom Envy model, in which case we recommend purchasing a faster aftermarket drive such as the Western Digital Black SN770 and installing it yourself (since it’s cheaper anyway).

According to HP’s spec sheet, all Envy TE02 models are equipped with a Micro-ATX motherboard nicknamed “BlizzardU.” This board supports dual-channel memory at speeds up to 3200MHz and is equipped with 4 DDR4 DIMM slots, so most builds include room to double your memory in the future, should you wish.

BlizzardU is built on the Z690 chipset, so CPU overclocking is technically supported. This is largely irrelevant, however, since all Envy models released thus far feature only non-K (non-overclockable) Intel processors. Thus, to actually make use of this board’s overclocking ability, you would have to upgrade to a K-series CPU such as the Intel Core i9-12900K.

Note that the TE02’s mainboard isn’t designed for heavy overclocking, as it has no VRM heatsinks and rather average power phases, and consequently we don’t recommend using it for this purpose.

The DIMMs used in the Envy are old-school no-heatsink green sticks. They’re clocked at 3200MHz out of the box.

One especialy nice thing about the Envy is all the components can be swapped out for others with relative ease. HP even released a teardown video for the Envy TE02 to make it easier for users to do so.

This is incredibly important, as it increases the PC’s lifespan monumentally. For instance, if you start out with an RTX 3050 and want to upgrade to a 40-series GPU down the line, you can easily do this with the Envy. If you want more storage, it can be added with ease, and the same applies to memory, your motherboard, CPU, or any other component.

Cost is, of course, one of the most considerations when buying any sort of PC. The TE02 is priced fairly competitively, depending on which model and where you buy.

While HP’s Omen and Victus lines are marketed as gaming rigs, the Envy is portrayed as a “Creativity” machine best for designers and the likes. This is a bit misleading, as some Envy prebuilts are more powerful than the Omen 45L’s, HP’s flagship gaming PC’s base-configuration.

Additionally, the new design doesn’t have the toned-down “office PC” look historically typical of HP Pavilion and Envy desktops, but looks more like a traditional gaming chassis, albeit with less airflow than many modern designs (it feels similar to the NZXT H510 without a glass panel).

Considering its performance, there’s no reason the HP Envy shouldn’t be considered by those shopping for a gaming rig. As prices are constantly fluctuating, the best prebuilt PC for you may be different at any given time, but the HP Envy is powerful and priced well enough that it should be in the competition at any given time.