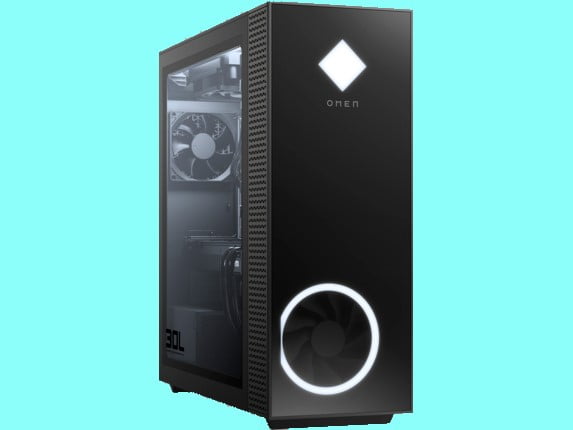 What separates the GT13-1380z from its Omen 30L peers is its selection of CPUs; it’s the only one with Ryzen 5000-series CPUs. The nearly-identical Omen 25L GT12-1340M has the same base-level specs; the only difference is the slightly smaller chassis size and the fact that the highest-powered GPU option is an RTX 3070 Ti. This means that if you’re a Ryzen fan, this is probably the best HP Omen desktop for you.

In this review of the GT13-1380z we’ll primarily look at the best configuration options in terms of value, as well as ways to save money by sourcing some parts yourself. We’ll also look at expected performance for the various graphics card choices.

Since we already covered the chassis, lighting, overclocking, and software in a previous review, we won’t do this again. To read more about these features please see our HP Omen 30L GT13-0395XT Review. Please note that the options from Amazon and Newegg are RTS and thus non-customizable. Only HP offers this option.

In this section we’ll look at the costs and general performance of the major components and whether they represent good value in relation to sourcing the parts yourself. We’ll put a star by the option we think offers the best value.

At the bottom end of the range, the R5 5600X is a powerful mid-range CPU that’s on par with Intel’s i5-11600K, capable of running games in 240FPS. It’s included in the base price of $979.99. If you’re going to buy this rig we highly recommend opting for the 5600X; the 5800X comes at an $180 upcharge while the actual market price difference between the two is only $110. Still, opting for the 5800X would be justified if you needed the extra computing power since you almost certainly won’t be able to sell the already-installed 5600X at market price.

An argument could be made for almost any of these GPUs, since at the moment most prebuilt PCs with a given graphics card are cheaper than buying the graphics card alone on a retail website. Such is the state of the market.

With that being said, there are two options that we wholeheartedly recommend avoiding: The 3070 Ti and 3080 Ti. These are ridiculously overpriced in comparison to the other options; the 3080 Ti is a hefty $600 more than the next-best RTX 3080, while the 3070 Ti is inexplicably priced higher than the better-performing RTX 3080. Go figure.

In the end, then, your choice of GPU should come down to your desired performance. If you’re going to be running games in 4K or in 1440p at high refresh rates, you’ll probably want the RTX 3080. For 1080p 240FPS at higher settings or 1440p gaming, the RTX 3070 should suffice for most.

The 3060 should be plenty for anybody gaming in 1080p 144FPS unless you like maxing out the graphics, in which case we’d once again point to the 3070. The 3060 Ti is a good bit better than its non-Ti counterpart, so we recommend it for anything that falls between.

Last but not least, we have the RX 5500. It will perform roughly on par with AMD’s RX 5500 XT (the base clock is marginally higher on the XT SKU), meaning 144FPS in a lot of games and 60FPS in anything.

The choice for RAM is extremely easy: choose the base option of 8GB. But wait a minute, isn’t 16 gigs the recommended “sweet spot?” Yeah, it is.

You’ll be a lot better off buying your own memory, though. If you want matching modules (and we wouldn’t blame you), just buy an identical module here and add it in. HyperX memory is admittedly somewhat overpriced, so if you wanted to save even more money you could buy a mismatched but equally performing module like this one. Otherwise you’ll be paying $100 for an extra 8 gigs of RAM, when the market price is closer to $40.

Lastly, if you want matching modules but feel that HyperX RAM is overpriced, you could buy a 2 x 8GB kit with the same specs from a cheaper brand like OLOy. You’ll still end up with 16 gigs of matching memory, but you’ll end up paying a little less.

Most users will find 256GB to be plenty of NVMe storage. Most of your files don’t need to be retrieved at ridiculously fast rates. Your boot times and game load speeds will be the main beneficiaries of these faster read speeds, so unless you have a large library 256GB will suffice.

If you desire more than 256 gigs of fast storage, you’re definitely better off buying aftermarket. An extra gigabyte of NVMe storage will set you back $140 while higher-performing drives like the WD Black SN750, PNY CS3030, Adata SX8200 Pro are usually much cheaper.

You might have déjà vu when choosing your secondary storage; as with primary storage, everything’s marked up above market price. We strongly recommend avoiding any of the NVMe drives as backup storage, since they’ll cost you a ton and you almost certainly won’t take advantage of their speed.

A 2TB hard drive is $89, while comparable 7200RPM drives like the Seagate BarraCuda and WD Blue are usually less than $50. Once again, you’re better off buying aftermarket. The price differential isn’t quite as severe as with other components, though, so if the time to order and install a hard drive is worth more than $40 to you, adding HP’s hard drive would be excusable.

This is an easy decision that boils down to which graphics card you chose. For anything up to and including the 3060 Ti, you’ll be fine with a 600W PSU. For the 3070 and up, you should pay the extra $40 for an 800W model. CoolerMaster’s power supply is of excellent quality and highly efficient.

Obviously your choice of components will be based on the performance you need from your PC. Our “best value” customization was:

In addition to a wide range of hardware options that caters to the entire performance spectrum, the GT13-1380z has several other features that add further value.

The motherboard comes with integrated WiFi and Bluetooth so even if your PC isn’t next to the router you’ll be good to go. Of course, this also opens the door to wireless audio and similar conveniences. These are included with the base model.

The Omen 30L chassis has a super-slick design, and complete customization of the lighting in HP’s software allows you to make it your own. You can read more about this in our full Omen 30L review.

Within Omen Gaming Hub, HP’s preinstalled software, you can overclock your CPU with the press of a button. As is the case with most OCs, you probably won’t see a huge jump in CPU performance. Still, a free performance boost never hurt anyone.

As with all newer HP Omen models, the GT13-1380z includes Windows 11 with the option to upgrade to Windows 11 Pro for 70 bucks (which we don’t recommend for most).